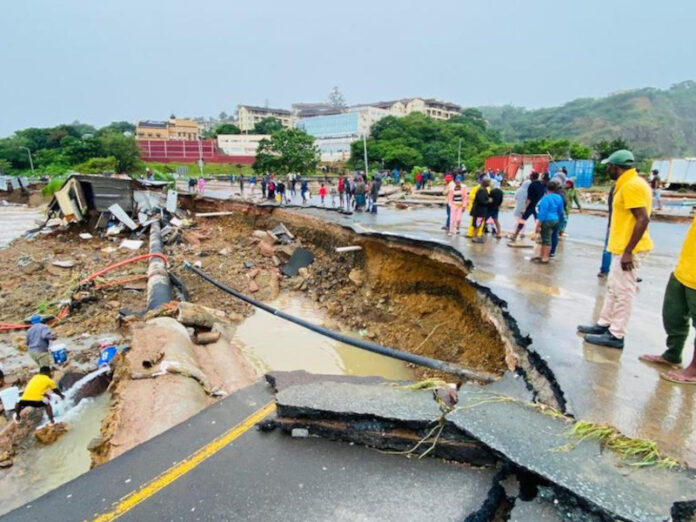 Devastating KwaZulu-Natal floods have destroyed homes, roads and claimed the lives of at least 45 people.

“There are definitely no-go areas. Don’t try to navigate through any heavy floods. If you are in a dangerous situation, get to safety and contact your local area leadership,” Ndlovu said.

KwaZulu-Natal Cooperative Governance MEC Sipho Hlomuka said his :”We lost a number of lives already…it is approximately 45 people in the eThekwini Municipality alone,” he said.

The province has opened eight halls for families who have had their homes destroyed and are seeking shelter.

Shipping containers washed away due to the floods saw several people take the chance to loot the products in the containers.

With memories of the July riots still rife in KZN, the threat of potential looting damaged areas will bring back bad memories for several shop owners across the province.

The South African Weather Service (SAWS) said the rain is likely to persist throughout Tuesday in the eastern parts of the country.

“Significant amounts of rainfall have already been experienced. The soil is saturated, and some drainage systems are already full,” SAWS said.

As people in areas affected by mudslides, flooding and structural collapses evacuated their homes, the army was called in to support the disaster management efforts.

CoGTA MEC Sipho Hlomuka said power supplies were damaged in the affected areas, adding that technical teams are working to restore the electricity.

He urged all residents who have homes on higher ground to open their doors to neighbours who are vulnerable to floods.

Several areas in KZN had up to five months of their usual rainfall on Monday, leading to several road closures in different parts of the province.

Zinhle Mali of the Road Traffic Inspectorate said several roads were waterlogged while others were closed due to flooding.

“Several roads at Amanzimtoti in the CBD are waterlogged and Umlazi is a no-go area,” Mali said.

A mother and her daughter were reported to be trapped underneath the rubble of their home.

ALS Paramedics spokesperson Garrith Jamieson said the family were in their home when it collapsed.

“The father managed to escape but the mother and two daughters are missing,” he said.

“It is believed that a sand bank at the rear of the property collapsed onto the house.”