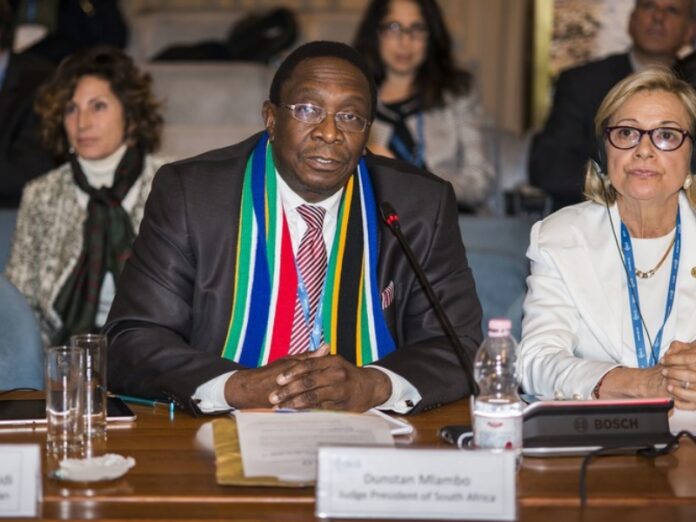 It may have been intended as a bombshell, but it landed as no more than a stink bomb when EFF party leaders attacked Chief Justice candidate Judge Dunstan Mlambo during his Judicial Service Commission (JSC) interview on Thursday.

Instead of asking about his plans for the country’s highest court, the red berets, who are among the panelists conducting the interviews, questioned the character and integrity of the judge.

They used the question-and-answer session to ask the judge about rumours of sexual harrasment claims levelled against him in the past.

The EFF leaders suggested that Mlambo has been accused of asking for sexual favours from women who want to act as judges  – but they provided any evidence to back up the claims.

Judge Mlambo denied the allegations and dismissed them as rumours.

Mlambo said such aspersions were an insult to him and those he appointed.

He complained that he was not given prior notice that he would be asked about the sexual harassment rumour and no formal complaint was ever raised against him.

“It pains me to know these rumours had found their way into my Chief Justice interview. It is clearly designed to poison my candidacy”, he said.

Mpofu asked if victims would come out into the open if Mlambo is named the next Chief Justice.

Responding to Mpofu, Judge Mlambo said “I have never sexually harassed anyone, particularly not women who have ambitions to join the Bench”.

Mlambo said his court has developed a sexual harassment policy, after two women judges complained about offensive language that had been used against them. He said they declined to take the matter further.

JSC chair Judge Xola Petse said it was not fair to raise the rumours in Mlambo’s interview.

Petse ruled that the questions should be completely removed from the record.

The encounter ignited a storm on social media with commentator Palesa Morudu Rosenberg noting that Mpofu had sunk lower than anyone thought possible “even for him”. She said that his “weaponization of gender-based violence against Mlambo at the JSC is most nauseating”.

There was a groundswell of support for Mlambo with some calling for Malema and Mpofu to be removed from the JSC.

One critic noted: “Julius Malema and Dali Mpofu are a disgrace. It cannot be emphasised enough how they do not belong in the JSC. For them it is all about politics and nothing else.”

Morudu Rosenberg added: “The JSC interviews always leave a bitter taste. No individual should be subjected to such uncouth behavior by politicians and lawyers with big egos.”

The JSC began the interview process on Tuesday with Constitutional Court Judge Mbuyiseli Madlanga in the spotlight, followed by Supreme Court of Appeal Judge President Judge Mandisa Maya. Acting Chief Justice Raymond Zondo will be the last to be interviewed on Friday.

The panel will deliberate on the interviews on Saturday 12 February.