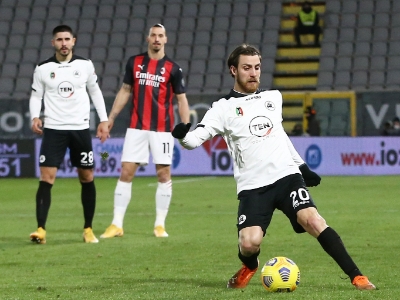 Giant-killers Spezia Calcio pulled off the biggest upset of the season by beating log leaders AC Milan 2-0 in the Italian Serie A match on Saturday at Alberto Picco Stadium.

The newly promoted side stunned the title contenders with second half goals from Giulo Maggiore and Simone Bastoni. Spezia recorded back to back wins against Sassuolo and AC Milan.

The defeat for log leaders AC Milan means that the title race is wide open. Defending Champions Juventus 1-0 loss to Napoli has made the title race even more of a lottery.

“If you watched us during the training, you could tell that our performance will be insufficient, including myself,” AC Milan manager Stefano Pioli told AC Milan twitter.

“We didn’t underestimate the opposition but we just failed to bring our quality, ideas and intensity to the field,” said Pioli.

“We deserved to lose against a team that played better than us and the responsibility is ours. And that starts with me.”

City rivals Inter Milan will have an opportunity to move to the top of the log tonight if they beat Lazio with the Milan derby next weekend.

Milan’s next match is the Europa League match on Thursday against Crvena Zvezda at Red Star Stadium, kick-off at 8pm.