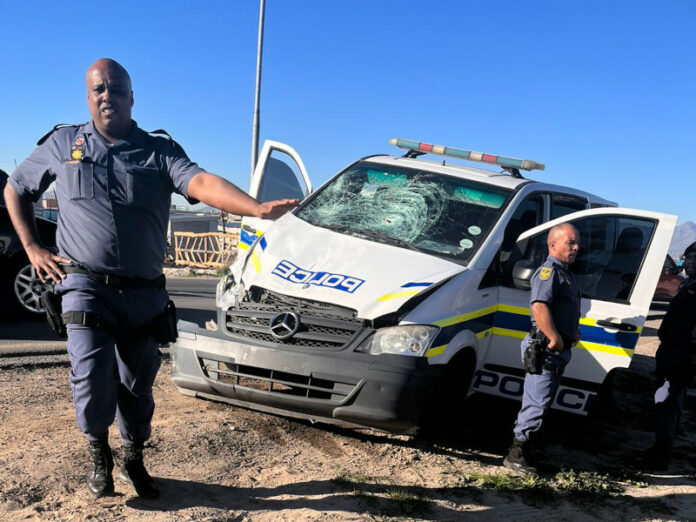 Three learners walking on the sidewalk along the Old Faure Road in Mfuleni, Cape Town, on Monday were hit by a police vehicle.

A resident said police officers were driving at high speed.

“The kids tried to run when they saw the vehicle coming towards them but they couldn’t beat the speeding vehicle,” a resident said.

Another witness Luvuyo Ndlovu said he was on the same street when a vehicle passed him at high speed.

“With the way they were driving I knew they were going to cause an accident,” he said.

“A few minutes later I heard a big bang and when I looked back I saw three learners in uniform lying next to the road.”

He said the kids didn’t deserve to have their lives cut short like that.

It’s believed that the cops were rushing to a scene where a hijacking had happened. The driver tried to overtake a car in front of them when they struck the kids.

The angry community wanted to attack the cops but were stopped by their leaders.

Colonel Andre Traut, spokesperson for SAPS in Western Cape, said two teenage male pedestrians were killed and a third one injured when they were struck by a police vehicle, adding that Mfuleni officers are investigating a culpable homicide case.

“The circumstances surrounding the accident are yet to be determined. The occupants of the police vehicle were not injured during the accident,” added Traut.