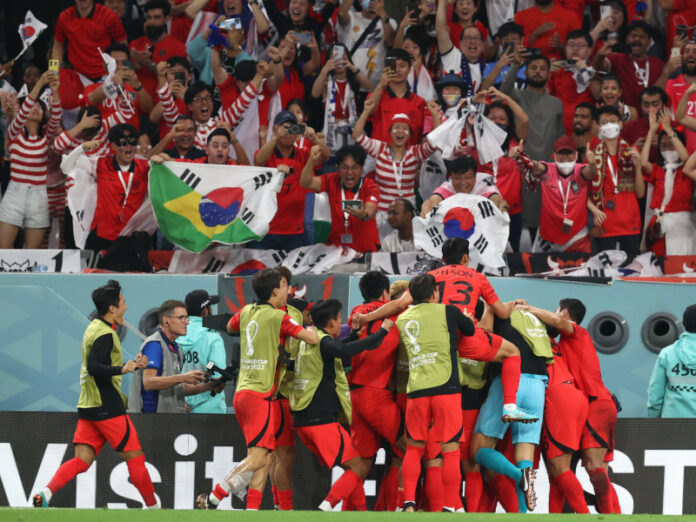 South Korea secured a famous victory over Portugal to send both Ghana and Uruguay crashing out of the World Cup.

The South Americans defeated Ghana but it was not enough as the Koreans advanced to the knockout stages for scoring more goals than Uruguay during the group stages.

Ghana’s 2010 World Cup nightmare came back to haunt them as Uruguay once again got the better of them.

Twelve years ago in South Africa, Ghana faced Uruguay for a spot in the semi-finals. A controversial Luis Suarez handball with a penalty miss sent the Black Stars crashing out.

Asamoah Gyan’s infamous penalty miss has remained a thorn in the side of Ghana ever since, raising the tensions ahead of their grudge match against Uruguay in Qatar on Friday evening.

Ghana were after revenge and were awarded a golden chance for the lead when talented midfielder Mohammed Kudus was brought down inside the box.

A bad case of deja vu was in the air as captain Andre Ayew stepped up to take the penalty – the striker’s woeful penalty was saved by Uruguay goalkeeper Sergio Rochet.

Rubbing salt into the wounds, only moments later Giorgian de Arrascaeta found the back of the net for Uruguay after tapping home a loose ball.

Suarez picked up the nickname “El Diablo” (the devil) amongst Ghanaian supporters after the incident in Soweto, this time around the striker earning himself two assists rather than getting sent off.

The second assist was again for de Arrascaeta, who showed incredible technique to volley the ball past Ghana goalkeeper Lawrence Ati-Zigi.

But all of it meant very little as South Korea secured a famous victory over the 2016 European champions.

Ricardo Horta found the back of the net just after the five minute mark for Portugal before Kim Young-gwon equalised before the half-hour mark.

In added time of the second-half Hwang Hee-chan found the back of the net to put them level with Uruguay on four points and on zero goal difference.

South Korea advanced by scoring more goals than Uruguay in their three fixtures.