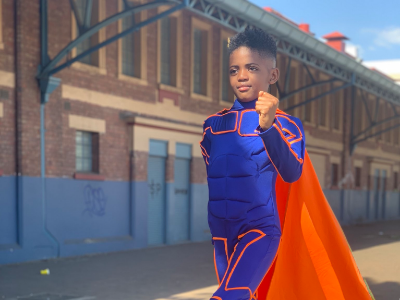 At the tender age of eight, Prince Mashawana is about to make history and become the youngest ever speaker to do a Tedx Talk.

Mashawana, better known by his superhero name SuperMash, has inspired thousands of people by giving them the motivation to see themselves as superheroes. SuperMash is South Africa’s first black fictional superhero. The basis of SuperMash is that he is a superhero that can share his powers with others. Powers that will allow children to fight any fear or challenge they may have as well as increasing their self-awareness that enables their emotional growth.

SuperMash is a character that was created by Rainbow Nation Comics. They collaborated with the young Mashawana to bring this character to life and create a more real character that could generate popularity. SuperMash attempts to tackle very serious issues that many South African children may face. Issues such as substance abuse, child abuse, bullying as well as discrimination that leads to violence.

Mashawana will join the likes of Bill Gates and Simon Sinek who have also been speakers at Tedx Talks, an outstanding achievement given he is only eight years old. SuperMash will be speaking at the TedxSandton later this month.