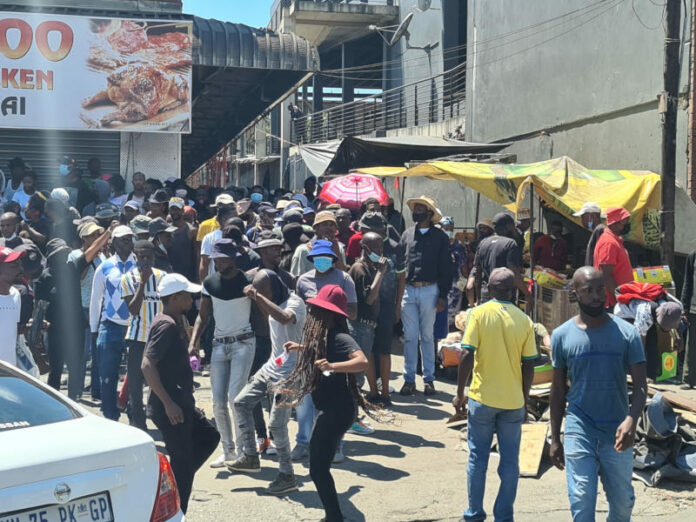 A group of gogos, all South Africans, are pleading with the authorities to stop the Alexandra Dudula Movement from carrying on their operations at Pan Africa Mall.

The group of women have alleged that members of the anti-immigration Dudula Movement are harassing them and extorting them for money.

One of the women, who asked not to be named for fear of being harassed, said members of Dudula have demanded money and other supplies in return for giving her a space for her stall at the mall, which they secured by driving away foreign merchants.

She said she has also been asked for bail money for arrested members, food, and brooms to sweep the streets.

She said this is unacceptable and should be stopped.

“The foreigners have left the mall but now, it’s us the locals being harassed by Dudula.”

Another woman said she witnessed a Mozambican man being assaulted by one of the Dudula members on Monday.

“One of the police officers had to intervene and rescue the man,” she said.

Scrolla.Africa spoke to Dudula Movement leader Simon “Msayza” Rati, who said there are selected members chosen to collect money to pay for a lawyer to represent the arrested members.

“He is free but he has asked us to help him with transport and accommodation,” said Rati of the lawyer, who will travel from Bloemfontein to Johannesburg to represent the arrested members who will reappear in court on 17 March for bail application.

“We are not funded and the money will come from our members – some are vendors.

Rati said he will engage with the complainants and identify those who asked them for money.

“If the people who have been asking money from our elderly were not appointed by the movement, we’ll deal with them,” he said.

He also said for those who don’t have money at the time Dudula members approach them, they must tell our collectors to come later after making sales.

“We will engage with the vendors and we will remove the rotten apples.

“Most of the complainants are using undocumented foreigners and paying them next to nothing, which we are aware of and we don’t want that. We want all foreigners out of Alex,” he said.