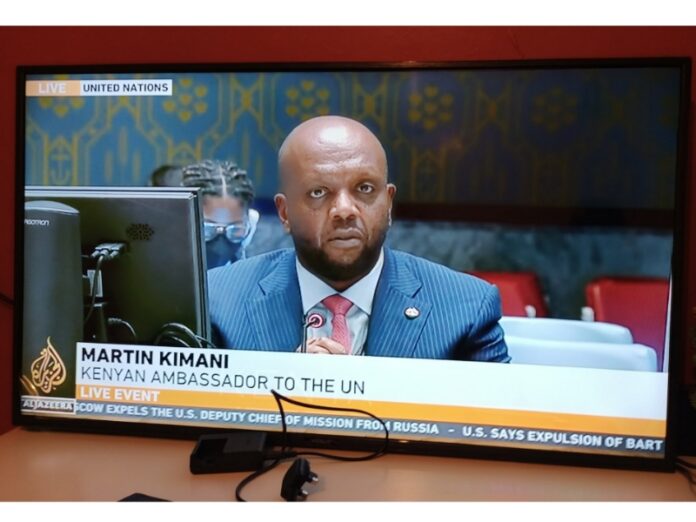 South Africa has finally joined other African nations in calling for Russia to remove its forces from Ukraine.

As Russia edged closer and closer to launching its invasion of its Eastern European neighbours this week, South Africa was reluctant to speak out against Vladimir Putin’s aggression.

At the UN Security Council Kenya, Ghana and Gabon all formally called on Russia to withdraw its forces this week. The voice that rang the loudest was undoubtedly that of Martin Kimani, the Kenyan envoy to the United Nations.

Kimani gave a speech on Tuesday to the UN Security Council – two days before Putin had declared war on Ukraine – calling for Russia to seek a peaceful solution to the conflict.

His speech compared Russia’s aggression towards Ukraine with the colonisation of Africa, and he urged Putin to take heed from the lessons Africa’s history can teach him.

“This situation echoes our history. Kenya and almost every African country was birthed by the ending of empire. Our borders were not of our own drawing,” Kimani told the security council.

“They were drawn in the distant colonial metropoles of London, Paris, and Lisbon with no regard for the ancient nations that they cleaved apart,” he continued, before warning that Ukraine now faces the same fate.

At the time, the South African government had remained quiet on the matter. When it did speak out, a whole day later, its response paled in comparison to Kimani’s.

In response to a parliamentary question about Russia, Minister of International Relations and Cooperation, Naledi Pandor, refused to lay any blame on Putin.

“South Africa encourages all parties to approach dialogue with the spirit of compromise in order to move the process forward without accusing any party, something that will not be helpful in the efforts to resolve the conflict,” she wrote.

After Putin invaded Ukraine in the early hours of Thursday morning, the Desmond & Leah Tutu Foundation called for “the South African government to join Ghana and Kenya in condemning Russia’s act of war.”

“This is no time to sit on the fence. The act of war and violence needs to be condemned in the strongest possible terms,” the organisation’s statement read.

Several hours later, the Department of International Relations finally put out a statement calling on Russia to withdraw its forces from Ukraine.

“The Republic of South Africa is dismayed at the escalation of the conflict in Ukraine. We regret the situation has deteriorated despite calls for diplomacy to prevail,” the statement read.

But this was clearly not the unanimous view in the country. Jacob Zuma’s daughter, Dudu Zuma-Sambudla enthusiastically supported the invasion, tweeting next to a picture of Putin:

“My Leader…I STAND WITH RUSSIA!!!”