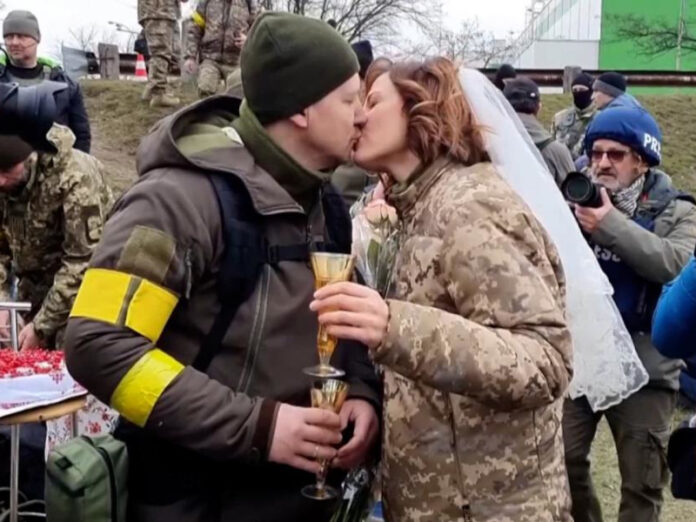 A Ukrainian couple who are both soldiers got married while fighting in the frontline against invading Russian forces.

After 22 years, Lesia Ivashchenko and Valerii Fylymonov finally decided to get married.

Some famous faces even made an appearance at the happy ceremony. Boxing heavyweight champions-turned-politicians Vitali and Wladimir Klitschko came to wish the couple all the best and Wladimir, who is the mayor of Kyiv, was pictured kissing Lesia, who had swapped her helmet for a veil.

The mayor later tweeted: “Today I greeted the soldiers of one of the battalions of the capital’s defenders Lesia and Valerri.

“They have been living in a civil marriage for a long time, and now they have decided to get married formally. The ceremony took place next to one of the checkpoints. Life goes on!”

Taras Kompanichenko, a famous Ukrainian musician who also signed up to defend his country, played the lute as Lesia walked down the aisle.

Afterwards, their fellow comrades relinquished their weapons for a while to enjoy a glass of champagne with the newlyweds.