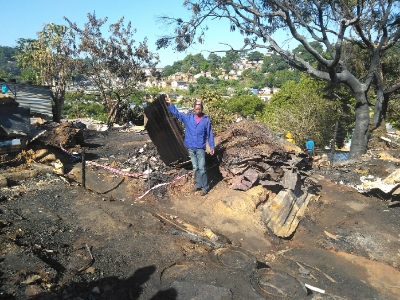 A woman has died and a teenage boy suffered serious burns when their shacks caught fire.

The fire which began on Sunday in the Marikana informal settlement in Cato Crest, Durban was allegedly caused by izinyoka connections.

It has left 48 families homeless.

Thanduxolo Sicebu, the father of the teenager said they were saved by his son who screamed when he saw the fire. Their family have lost their home and all their belongings in the fire.

The fire started at Thanduxolo’s neighbouring shack belonging to Nomasamson Dlamini, who was burnt to death.

On Monday, Thanduxolo and many other families were cleaning up the rubble of what used to be their homes.

“We don’t have anything to use to rebuild our shack. My children didn’t even have time to save their school books. They’ve lost everything,” said Thanduxolo.

“We are forced to seek shelter with neighbours.”

Luck Mlungwana said he was woken by the sound of people screaming for help and when he went outside, the fire was very close and approaching fast.

“I had to run for my life because I didn’t have time to go back inside my house to take my valuables. The only thing that was on my mind is to get myself to safety. Right now, I don’t know where I will sleep because all I have are the clothes I’m wearing.”