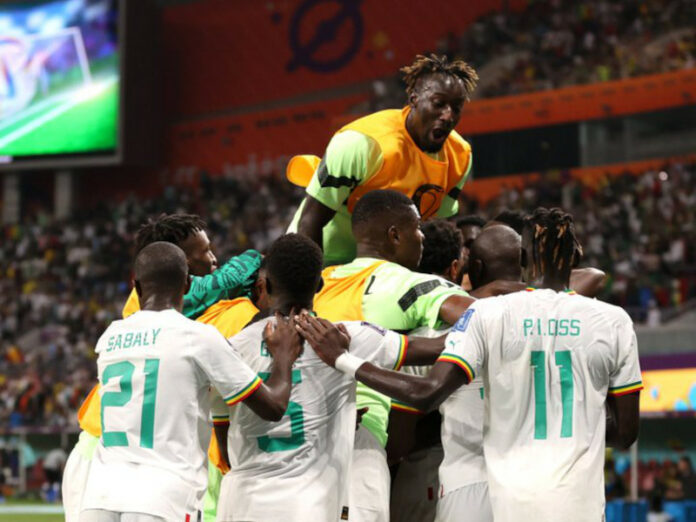 For only the second time in their history, Senegal have advanced to the knockout stages of a Fifa World Cup.

After losing their opener to Netherlands, the African champions defeated Qatar and needed another victory to secure progression to the round of 16.

And the Lions of Teranga played with all the passion the situation demanded, dominating the possession and putting constant pressure on the Ecuador backline.

That pressure paid off when Ismalia Sarr was fouled inside the box moments before the half-time break.

The Watford man stepped up and coolly slotted the ball home into the bottom right corner to give Senegal the lead.

The South American side started the second period the better team and were rewarded for their efforts. Brighton & Hove Albion’s coveted youngster Moises Caiceido tapped the ball home from a corner.

A draw would have been enough to put Ecuador through, but as is often said, you are at your most vulnerable after you’ve just scored.

And that was exactly the case as Senegal regained the lead just two minutes later, with captain Kalidou Koulibaly finding the back of the net with a sweet volley.

At the final whistle, the scoreboard at the Khalifa International Stadium read 2-1 to Senegal, and the team rejoiced as they looked ahead to the knockout stages.

The result comes two decades after Senegal last made it to the quarter-finals at the World Cup in Japan and South Korea.

Manager Aliou Cisse and his men started the year by winning the Africa Cup of Nations and now end the year as the first African side to advance in Qatar.

Senegal also became the first African country to progress to the knockout stages since the 2014 World Cup, with both Nigeria and Algeria falling at the round of 16 stage in Brazil.

No African side managed to get past the group stage at the 2018 World Cup in Russia four years ago.

In the other Group A fixture, Qatar became the first host country to end their journey without single victory.

Netherlands defeated the hosts 2-0, courtesy of that man again Cody Gakpo, the winger scoring his third goal with as many shots in the World Cup.

Barcelona man Frenkie de Jong doubled Netherlands lead in the second-half, tapping the ball home after the goalkeeper parried the ball into his path.