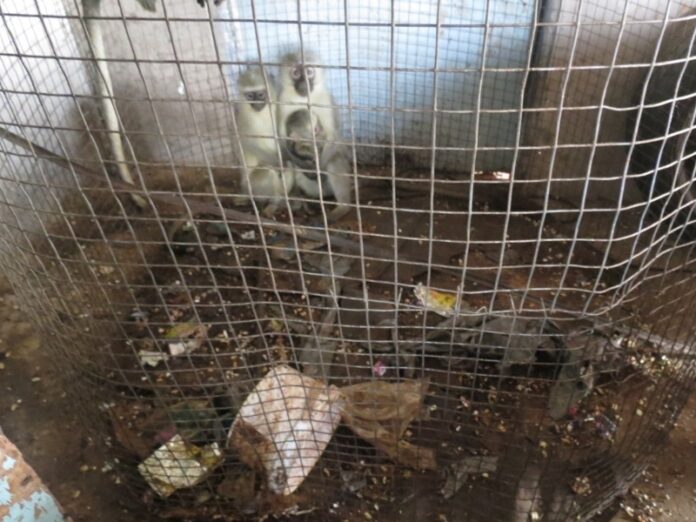 When the Society for the Prevention of Cruelty to Animals (SPCA) in Bloemfontein were called regarding a sangoma keeping monkeys at her home, they got more than they bargained for.

They initially thought they would be rescuing five monkeys but they also found a tortoise, chickens and several dogs.

Upset about losing her animals, the sangoma allegedly grabbed a bucket containing yellow-tinted water and “cast a spell” on the group as they were searching.

The SPCA was initially denied entry to her house despite their search warrant.

“Before we could enter the property, we waited two hours for the owner only to find that she was hiding inside her house. When we opened the garage where the monkeys were kept, we were shocked,” the SPCA said in a statement.

The SPCA said that the same liquid she used to cast the spell on them was visible on the monkeys, and said they suspected the sangoma mistreated the animals using this mysterious liquid.

The organisation added that the conditions the monkeys were living in were appalling. They found the animals caged in an unbearably hot garage.

The SPCA said the monkeys were shocked to see light as the garage they were trapped in had no sunlight.

“Just standing in the garage for a minute we were overheating, and just to imagine the monkeys had to stay inside that garage without any food and water,” the animal welfare organisation said.

“The cage was so dirty that there was a layer of faeces and urine. This caused burns to the monkeys’ hands and backsides.”

After finding the monkeys, the organisation began a search of the rest of the property. They soon discovered a tortoise, dogs which seemed to have been infected with parvo, and several chickens.

Now the animals have been removed from the property, animal cruelty charges are being investigated against the sangoma.