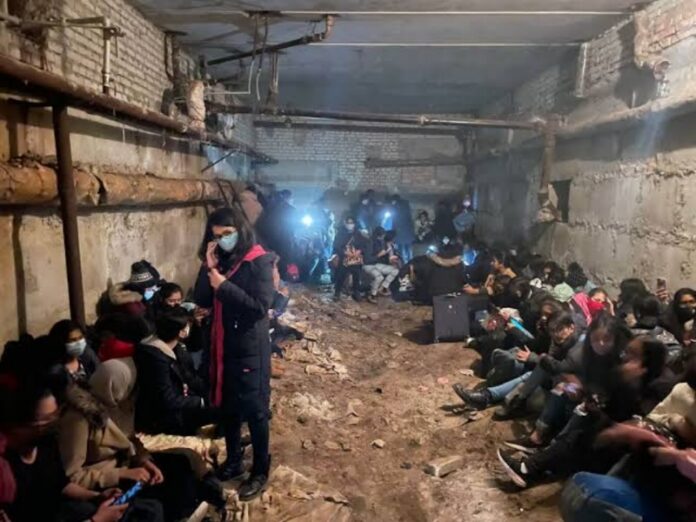 Scores of South African students touched down at OR Tambo International Airport in Johannesburg on Thursday after fleeing from the Russian-Ukrainian war. But their academic future hangs in the balance.

The students said the trauma they endured in the war-torn eastern European country was too much to bear and they are not willing to return there, even after a ceasefire.

The beleaguered medical students had to seek refuge in a subway on the Ukraine/Hungry border following a bomb explosion on 24 February and were left stranded without any humanitarian aid.

Luphumlo Ntengu, from Gqeberha, who has been studying at Vinnyitsia National Medical University in Ukraine since 2016, said he was left with only two months to complete his degree.

“I was so close to completing my studies I was even hesitant to leave. However, the situation was getting worse and returning home was the only option.”

Mandisa Malindisa, a fourth year medical student at Karkiv National Medical University, said the general consensus among the distraught students is that they are not returning to Ukraine, saying they are in talks with South African universities to negotiate for enrollment.

“We have just had an online meeting with medical deans and vice-chancellors from some South African universities to find ways of completing our degrees. Instead of going to Ukraine, we will rather pursue our studies at home,” she said.

Malindisa’s classmate Nkateko Muyimane, 24, from Tzaneen in Limpopo, said the sound of the first bomb still lingers in his ears.

“At this moment, Ukraine is not an option to study. Like it or not, home is where we will be safe.”

During the 10 March meeting, which was attended by the medical expert and political thinker Dr Mamphela Ramphele, she said South African institutions should assist the students in completing their studies.

“We really need to rethink the way we address support to young people to develop into better versions of themselves to build the country. This crisis was an opportunity to get our act together and open conversations about how to create effective, inclusive programmes for young people,” she said.