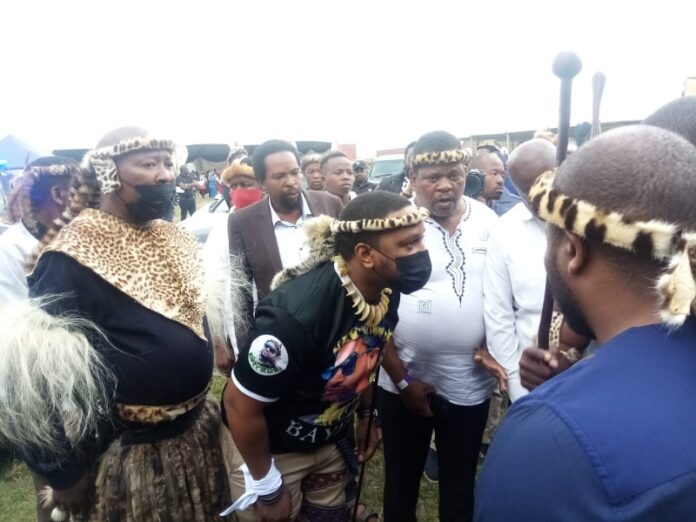 King Misuzulu kaZwelithini’s uMembeso ceremony on Saturday for his fiancé Queen Ntokozo kaMayisela became a moment for reconciliation as a number of royal rebels came out to support him for the first time since he was named as king.

Royal rebels aunt Princess Thembi Zulu Ndlovu and two wives of the late King Zwelithini KaBhekuzulu – Queen Thandekile MaNdlovu of Linduzulu and Queen Zola Lamafu of Ondini Palaces – put aside their differences with King Misuzulu to join him in celebration.

They gestured a salute towards the king when he arrived to join his bride-to-be Queen Ntokozo kaMayisela Esigcawini, for a second umkhehlo ceremony held in Blaauwbosch at Sgodiphola community sports field.

“This is not a day to talk about other issues. I am here to enjoy and celebrate this beautiful ceremony,” said Princess Thembi with a smile on her face.

She was seen sharing jokes and laughs with Queen Zola Lamafu, who is the sixth wife of the late King Goodwill Zwelithini kaBhekuzulu.

“We are here to support our son Misuzulu and it was his father’s wish to marry kaMayisela,” said Queen MaNdlovu.

“He even said he has more than 22 sons, but none of them have ever brought a bride to the Zulu Kingdom. We are glad that Misuzulu is honouring his father’s wish. We are hopeful that our bride will work hard to uplift the Zulu nation.”

All six queens of King Zwelithini were showered with gifts by the Mayisela family, including those gifted to the late Queen Regent Mantfombi.

This followed the Zulu Royal family presenting gifts including cows to the Mayisela family as part of uMembeso.