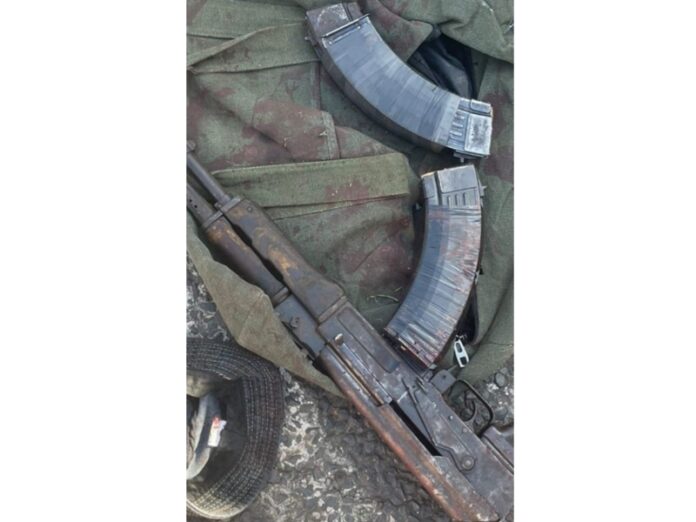 High calibre machine guns, AK47s, R4s, muthi, petrol and explosives are among the weapons found at the scene after police and 25 cash-in-transit (CIT) robbers exchanged fire on Monday.

When the dust settled, bodies were scattered on the streets of Rosettenville and inside people’s yards with bullet shells everywhere.

Minister of Police Bheki Cele visited the scene on Monday night and said most of the weapons discovered after Monday’s bloodbath are used in the police and the defence force.

“Most rifles here are AK47s with double magazines. There are explosives here, there’s petrol, umuthi and everything,” he said.

Gauteng Police Commissioner Lieutenant-General Elias Mawela, who accompanied the minister to the scene, said the suspects are hardcore criminals.

“The number of unlicensed and illegal rifles which are still lying there – we have counted eight and there is another one on the freeway where it was thrown by those escaping when they realised they were being chased by the police,” General Mawela said.

He added that three members of the SAPS – an Airborne Law Enforcement Officer and two members from the Moffatview Police Station – were shot and wounded during the attack. In addition, a JMPD officer was among the wounded officers.

“One member from the SAPS has since been discharged and others are still receiving medical treatment.”

Gauteng Premier David Makhura confirmed on Tuesday that two police officers are among the 25 suspects.

A statement released by IPID later confirmed that the two officers are still on the run, while five other suspects are still at large.

The national police commissioner General Khehla Sithole said the police established a National Task Team in 2020 to prevent and combat aggravated robberies and in particular CIT heists across five provinces.