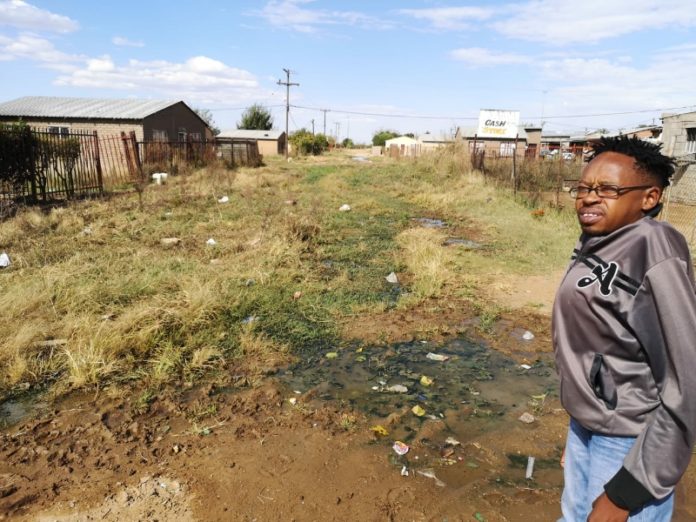 Kabelo Tshwelesa was doing great business at his spaza shop in phase 5 in Mangaung, but a river of poo has caused him to close his doors permanently.

Three years ago a contractor installed a storm water drain but left the pipe leaking and Kabelo can’t get the pipe repaired.

Kabelo said he has tried all possible avenues to make sure their street gets the look it did years ago but to no avail.

“After the spillage of sewage, customers started staying away from my shop,” he told Scrolla.Africa.

“The sewage covered almost the entire street and even the grass started growing. My customers could not access my shop and no one wanted to risk falling into the stinking water.”

He said the ward councillor has known about the problem but that doesn’t make any difference.

“He calls the workers but just when they leave, the spillage starts again. Even police vehicles and ambulances can’t get through.”

Another resident, Dan Mosole said he had to use a wheelbarrow to take his sick cousin to an ambulance waiting nearby.

“I don’t blame the paramedics that they didn’t want to come closer,” he said.

Residents said the biggest challenge is the kids can get sick because of trying to play in the sewage.

“We have to guard them,” said Puseletso Maine.

Mangaung Metro Municipality spokesperson Qondile Khedama said they were not aware of the matter.

He asked Scrolla.Africa to send details and they will follow up on it.

Khedama said: “We will send this to Councillor Ramabodu and those departments that will assist.”