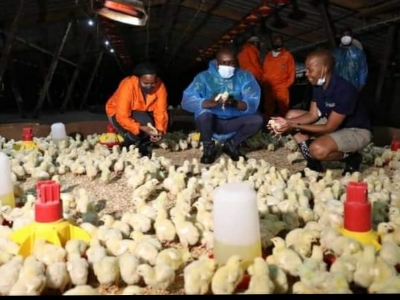 After a group of 20 Rainbow Chickens workers got the chop in 2017, they refused to chicken out.

They decided to start their own chicken farm in Cato Ridge west of Durban.

The farm, known as the Isukile Agricultural Cooperative, employs 34 permanent workers, and they have produced 7,500 chickens since early last year.

Zilungile Ngcobo praised her colleagues for not running away when things were tough.

“There was a time when we felt like throwing in the towel, but we stuck to it, and today we can see the results,” she told Scrolla.Africa.

Zilungile was upset when she got the retrenchment letter four years ago and with a family to take care of. She had to make a plan quickly.

“We approached the eThekwini Municipality which had a farm in the Cato Ridge area that lay fallow,” she said.

“I couldn’t believe it when the municipality gave us the farm.”

Sandile Thusi says he thanks his fellow members of the cooperative for taking him under their wing.

“I never dreamt of running my own business. If it wasn’t for my colleagues I would still be searching for a job,” he said.

With eight years of experience working at Rainbow Chickens he said it was not difficult for them to run their business.

Although the chicken business was flourishing, Sandile, who comes from Hammarsdale, decided he would not put all his eggs in one basket.

“I decided to also sell fruit and vegetables in my hometown. The cooperative has taught me many things about business. I’m looking at starting more businesses.”

Ethekwini Mayor Mxolisi Kaunda said the municipality would upgrade the Cato Ridge farm into an Agri-Park Incubator which could potentially be good for job creation.