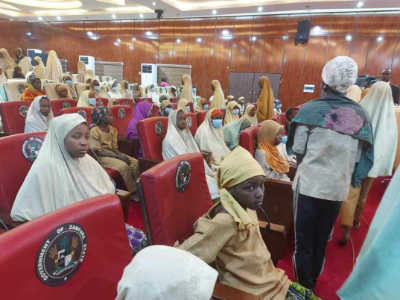 There was joy and celebration as hundreds of schoolgirls who were abducted by armed men from their boarding school in Northwest Nigeria on Friday were freed on Tuesday.

But thousands more remain captives of bandits and extremist groups whose range of operations, once restricted to the North East corner of the country, has spread across Nigeria’s predominantly Muslim north.

The release of the girls was the second time in less than a week that gunmen have returned kidnapped schoolchildren.

The girls were taken from a government secondary school in the town of Jangebe in the state of Zamfara.

“It gladdens my heart to announce the release of the abducted students from captivity,” the governor of Zamfara State, Bello Matawalle, said. About 279 girls were in the group.

Young boys and girls have increasingly become targets of kidnapping by armed groups looking to make money. The Nigerian government denies paying ransom money for them.

Distraught parents described how they heard the shooting and learnt that their daughters had been taken.

One man, who has two daughters at the school, found his youngest daughter crying.

“I rushed to her and grabbed her firmly, hoping to hear that her older sister was safe, too. But she shook her head and said, ‘They took her away.’ And she broke down in tears again.”

His daughter told him that the armed men were wearing uniforms and claimed to be with the military.

The younger daughter, 13, hid under her bed and watched as her older sister, 14, was led away with hundreds of other girls.

A video posted on Twitter showed some of the girls walking past journalists in a straight line — solemnly and silently — as cameras flashed. The footage showed some as barefoot, while others were limping.

On Tuesday,  the state governor, Matawalle, struck a note of celebration. “I enjoin all well-meaning Nigerians to rejoice with us as our daughters are now safe.”