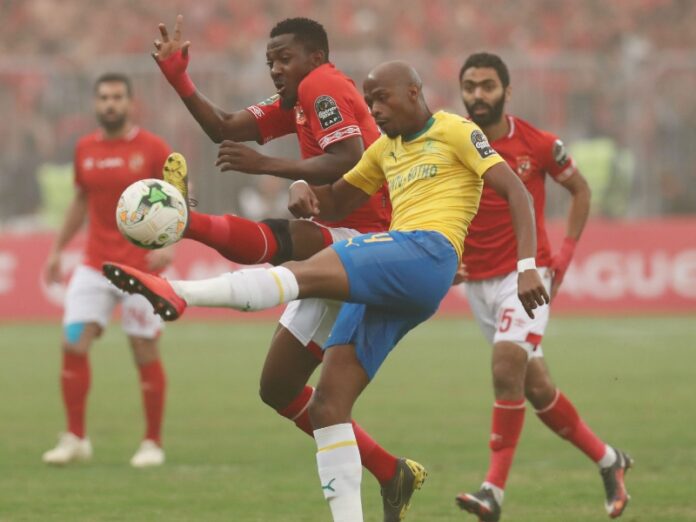 Pitso Mosimane’s Al Ahly have been boosted by the return of star forward Percy Tau and number one goalkeeper Mohamed El Shenawy, from injuries ahead of their clash with Mamelodi Sundowns.

The goalkeeper is said to be fit and ready to start against Sundowns in the CAF Champions League Group A encounter on Saturday, at Cairo International Stadium.

Tau has just started training with the team after sustaining a muscle injury a couple of weeks ago. According to reports in Egypt, the South African international has a 50/50 chance of being featured against his old club.

Mosimane, however, could be tempted to give Tau a run in what could be an emotional reunion with his former teammates. He made his name at Downs and played a huge part when the club won the competition in 2016.

The Red Devils will be looking to emulate last season’s feat over Masandawana, where they beat Downs 3-1 on aggregate in the quarterfinals of the competition.

Last time Sundowns visited Al Ahly it ended 2-0 in favour of Mosimane’s lads. The return leg in Tshwane was overshadowed by ugly scenes outside the Lucas Moripe Stadium.

Downs fans were seen insulting Mosimane in a video which was captured before the match, which ended in a stalemate. Mosimane and his chargers went on to successfully defend their Champions League title.

“We are aware that it’s a tough group. We can never make that mistake of focusing all our attention on Al Ahly. It’s a group where 12 points put you in a position to qualify for the quarter-finals as the winners of the group,” said Mokwena.

He added that Al Ahly can only offer them six points and the rest they will have to negotiate with Saudi outfit Al Hilal and Sudanese team Al-Merreikh.

“You have got to give them the same amount of respect in terms of attention to detail that you’d give to Al Ahly,” he added.

Downs, who stayed in Egypt after their draw against Al-Merreikh last Saturday, are currently leading the group with four points after two matches. The Red Devils are in second with a point after one match.