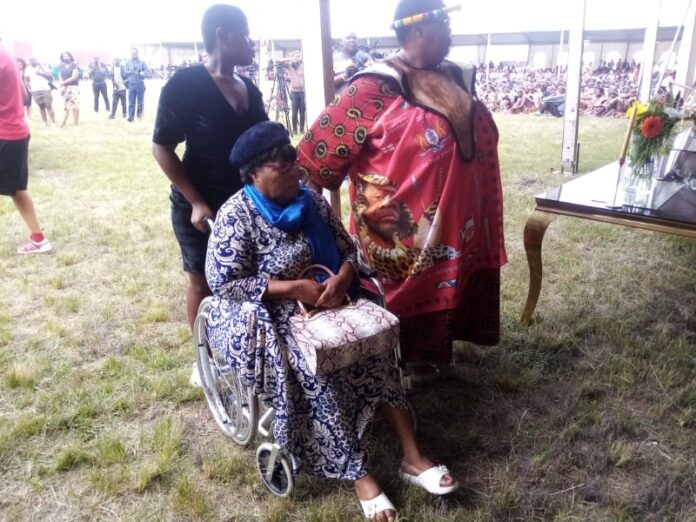 There was some hope that Princess Thembi Zulu Ndlovu, the royal rebel aunt, had permanently set aside her differences with King Misuzulu KaZwelithini after celebrating with him at his uMembeso ceremony on Saturday.

However, it hasn’t taken her long to launch yet another attack over the Zulu throne.

This week, Princess Thembi has issued a statement stating that her attendance to the ceremony was not an endorsement of the King.

“I want to make it clear that my presence at the uMembeso ceremony of Prince Misuzulu was part of our decision as the family that from time to time we will support each other in events such as weddings or uMembeso,” she said.

She added that her attendance doesn’t change her position that Prince Simakade is the rightful heir to the throne and not King Misuzulu.

On Saturday she and other allies showed a united front in support of King Misuzulu for his uMembeso ceremony to his fiancé Queen Ntokozo kaMayisela.

The king was forced to leave the ceremony in a hurry after receiving information from his traditional healer that his life was in danger.

Princess Thembi didn’t attend the first leg of the ceremony at Queen Ntokozo kaMayisela’s home but joined the royals later at the umkhehlo ceremony that was held at Sgodiphola sports field where she attracted much media attention.

The Princess also complained about the report by the panel of Dr Nkosazane Dlamini Zuma and former KZN premier Willies Mchunu.

“We haven’t received that report as promised but the only thing we saw was the recognition of Prince Misuzulu without our consent as the family. We want that report withdrawn as well as the withdrawal of Misuzulu’s recognition, failing which, we will instruct our lawyers to go to court,” said Princess Thembi.

Prince Simakade is the eldest son of the late King Goodwill Zwelithini kaBhekuzulu with his teenage lover from the Mthenjane family. He was then adopted by Queen Regent Mantfombi kaSobhuza before the birth of her own son, King Misuzulu.

King Misuzulu’s lawyers have responded to Prince Simakade saying that the case has no basis on which to go to court.