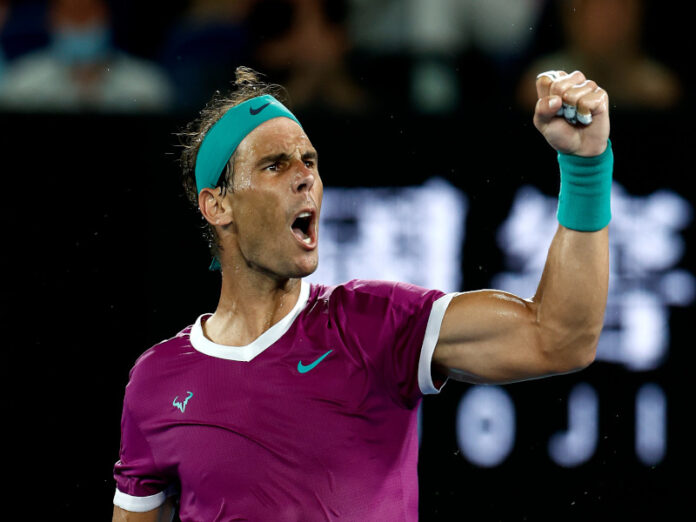 Daniil Medvedev won the first two sets and it looked as though he would run away with the Australian Open Grand slam, but Rafael Nadal had other plans.

He completed the ultimate comeback in a 5-set thriller, winning his second-ever Australian Open crown with a 2-6, 6-7, 6-4, 6-4, 7-5 victory in over five hours of gruelling tennis.

Nadal wrote his name in the history books by becoming the first male tennis player to win 21 Grand Slam titles as he is now one clear of both Roger Federer and Novak Djokovic.

The “King of Clay” had the Australian crowd behind him from the onset, but it didn’t look good for him when his Russian opponent won the opening two sets and was one set away from spoiling Nadal’s party.

However, Rafa, as he is known, stepped it up a few gears and rolled back the years to claim the next two sets in emphatic fashion.

By the fifth and final set, Nadal was in full flow and playing with his esteemed confidence. He and the crowd felt he was on course to make history and they were right as he dominated the tiebreaking set to become champion.

The miracle aspect of his Melbourne triumph is that Nadal and his coaching team were unsure if he was fit enough to even play in the year’s first Grand Slam. Many believed he had to win the first set if he had any chance of winning.

The Spaniard however showcased that experience trumps all else as he fought back in incredible fashion to prove why he is one of the greatest tennis players of all time.

The iconic tennis player won his first Grand Slam in 2005 and amazingly, 17 years later, is still competing at the highest level of tennis with no sign of slowing down anytime soon. s

It was incredibly nostalgic to witness Nadal play his iconic style of tennis once again, the powerful forehands mixed with his spinning backhands, all with the legendary headband tied at the back of his head.

The 25-year-old Medvedev will no doubt be disappointed and will certainly rue his missed chances throughout the match. A lack of final match experience perhaps came into play. This was only his fourth final.

Medvedev suffered a minor injury during the fourth set, but at that point, it already felt as if Nadal would emerge victorious in one of the best finals Grand Slam tennis has ever witnessed.