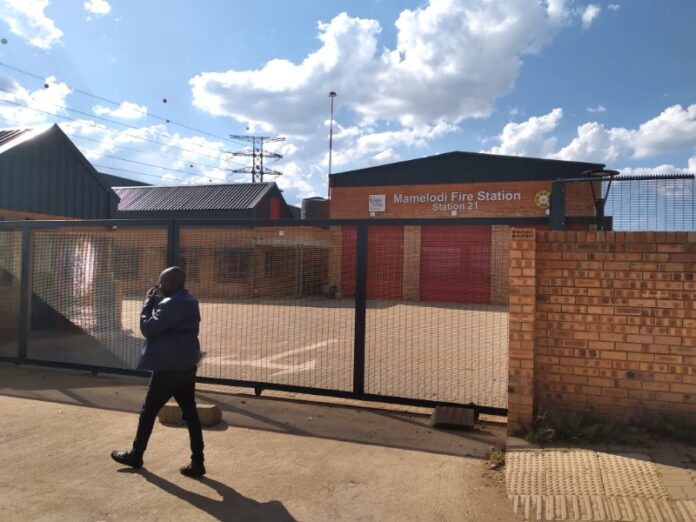 When the mayor officially launched the R62 million Mamelodi Fire Station last October, he promised residents it would start operating the following month.

Six months later there is no activity at the station. There is no sign of a firefighter or a fire engine.

Earlier this year, thugs burgled the station and stole steel window frames and other fittings.

The fire station was expected to serve residents of Mamelodi and Nellmapius, two areas that are surrounded by informal settlements which are prone to shack fires and flooding.

The R62 million was reportedly paid to HBC Construction to complete the fire station.

During the launch, Mayor Williams, accompanied by MMC for Community Safety, Cllr Karen Meyer said the new station would afford the city the opportunity to respond promptly and without delays to emergency calls.

Williams said the establishment of the station came after assessments indicated that there was a need for an emergency service station in the northern parts of Mamelodi as the nearest station is more than 15km away.

But despite all the promises it doesn’t look like the station will open any time soon.

Resident Brenda Moloto said the station is near Phomolong which is the biggest informal settlement in Mamelodi.

She said shack fires are common in the area and residents have made peace with trying to fight the fires using water buckets.

“It is so wrong that we are looking at a fire station across the road yet we use buckets to put out fires. It is as if the government is laughing in our faces,” she said.

Brenda said the mayor used the station to make himself look good but clearly he doesn’t care about the wellbeing of residents.

“He said the station would begin working in November. If he was a committed servant of the people he would have come to see if things were running smoothly,” she said.

Pompo Moretsele of Extension 24 Nellmapius said in February her ex-boyfriend torched her shack and everything burnt to the ground.

“Maybe if the station was working some of my belongings would have been saved.”

Tshwane Emergency Services spokesperson Charles Mabaso said they are aware of the concerns of the community.

“The job is 97% complete.  There are some construction compliance matters that the contractor is attending to before the issuing of an occupancy certificate,” he told Scrolla.Africa.

“The station can only start operating then. Good progress is being made in this regard and the Department is receiving regular feedback.”