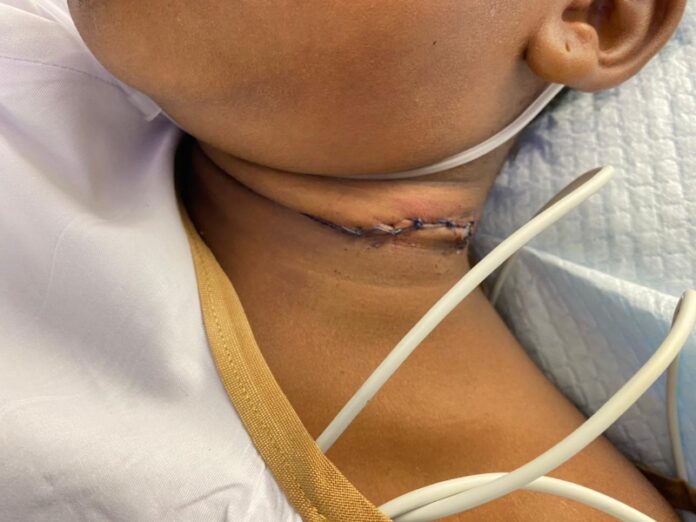 When her daughter’s ex-boyfriend asked to take her nine-year-old granddaughter for an ice cream, the granny didn’t suspect anything. After all, the little girl had known him for years.

But as soon as the ex and the girl got into his car parked outside the gate, the grandmother heard her scream in agony.

He was allegedly trying to cut off the girl’s head with a kitchen knife.

Her screams alerted her grandmother and nearby neighbours who went to her rescue. The man threw the girl out of his car and sped off.

But much of the damage had already been done. The child was rushed to hospital with severe wounds to her neck and remains in critical condition.

It’s alleged that the man, who comes from Mamelodi outside Tshwane, didn’t take the break-up very well.

He kept begging the lady to take him back but she refused, accusing him of being abusive. He threatened to do something terrible to her and her family but she didn’t budge.

He carried out his threat on Sunday afternoon.

Out of shock the grandmother collapsed and together with her granddaughter was admitted to hospital.

The girl’s biological father told Scrolla.Africa that his child was now fighting for her life.

“The grandmother was discharged on Monday but my daughter is in a critical condition. I have never thought people could be so evil, worse to children. I didn’t sleep on Sunday; the mother of the child hasn’t stopped crying,” he said.

As for the suspect, “He is a monster, he can’t live among people, he needs to be locked away for a long time”.

Police spokesperson Lieutenant Colonel Mavela Masondo said the suspect handed himself to the police and is facing charges of attempted murder.