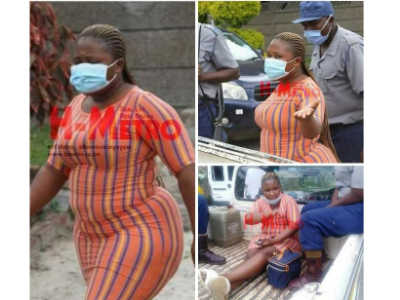 A Zimbabwean prostitute has been arrested after she was caught bedding a 13 year old boy.

Police allege that the boy and the woman met on a dating site and arranged to have sex at the boy’s family home in Houghton Park, Harare.

The woman faces charges of “Performing Indecent Acts with a young person.”

The boy told the woman to bring sleeping tablets with her for his siblings aged 7 and 11.

Police said she demanded USD125 as well as the money she used to buy the sleeping tablets but the boy had no cash.

The boy phoned his grandmother, telling her there was a robbery in progress at his home and the robbers wanted cash.

The grandmother allegedly phoned the boy’s parents who were at work. The boy’s father took the two to a police station where a case of Performing Indecent Acts with Young Persons was opened and she was detained.

The story has created mixed reactions on social media.

Isaho Wa Mashuro said on Facebook: “She was on a dating site. We should blame the kid because that is that lady’s source of income.”

Shelton Tapiwa Chiyangwa said he blamed the boy and the parents.

“He wasn’t raped. The parents are to blame too for raising a silly boy who even knows drugs and dating sites.”

Jimmy Mupfururi said he sympathised with the woman as she is a prostitute.

“But she should have left when she realised the client was a minor.”