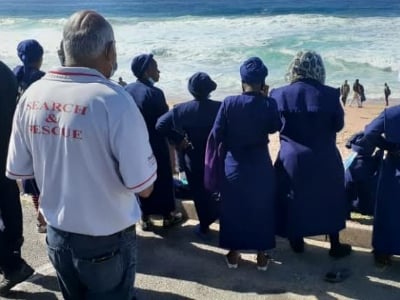 What was meant to be a cleansing and prayer ceremony turned tragic after a Zionist priest drowned in Verulam north of Durban.

The lifeless body of Mbongeni Ngcobo, 45, was recovered by search and rescue police at La Mercy beach north of Durban on Saturday.

Thabo Mkhize, a congregant who was among the eleven people at the ceremony recounted harrowing details of the tragic night.

“That was the most painful thing I have witnessed in my life. It was more like a movie to me.”

“It is difficult to sleep at night following the incident. This painful episode will always play in my mind.”

Mkhize said everything was well when they arrived to do the cleansing ceremony.

“But as soon as we started the cleansing ceremony, things turned ugly when the current changed. We were all scared and ran out of the water because we could see that the tide was big.”

The priest was praying when he drowned.

Other congregants ran out of the water and watched, helplessly, when Ngcobo drowned and pleaded for help.

“That was the most painful thing to watch. We were shocked and traumatised to watch that thing unfold before us.”

Mkhize said he had just joined the church but gave no details about the priest’s life.

“Please give us time to mourn him. We will be able to speak at a later stage when we feel a bit better,” she said.

Members of the Reaction Unit of South Africa (Rusa), were the first to arrive on the scene.

Rusa said according to the priest’s wife, the prayer was expected to be conducted at Intaphuka, Ndwedwe but he told the group to go to the beach after he had a “premonition” from the Holy Spirit.

Provincial police confirmed the case and said an inquest docket has been opened.