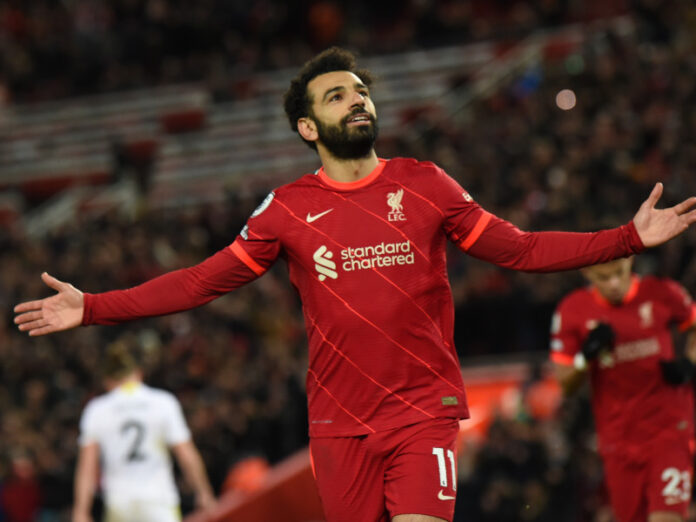 Liverpool’s African heroes Sadio Mane and Mohamed Salah were once again the stars of the show as the Reds thumped Leeds 6-0 to move within touching distance of Manchester City.

Many thought the Premier League title race was all but over in December when Pep Guardiola’s chargers held a double-figure points lead at the top of the table. However, with Liverpool’s crushing win, they are just three-points behind City.

Salah opened the scoring with the penalty and had a hand in a rare goal for centre back Joel Matip who darted into the Leeds box before a sublime finish made it 2-0.

Salah scored another penalty before half-time to all but wrap the game up.

Africa Cup of Nations winner Mane was not going to hang around without having his say and that he did in emphatic fashion, scoring two goals ten minutes apart to add further damage to a wounded Leeds outfit.

Virgin van Dijk rounded up the scoring in the 93rd minute to give Liverpool the perfect preparation victory ahead of the Carabao Cup final on Sunday.

As in previous seasons, it appears the Premier League title race between Manchester City and Liverpool will go down to the wire.

With just 12 games to go and both sides winning every match, they still have to face each other in what could decide the title.

Liverpool will feel they have the momentum on their side as City suffered a shock 3-2 defeat to Tottenham Hotspur at the weekend and Liverpool is enjoying their best form of the season.

Jurgen Klopp and his side will have to shift their focus to the Carabao Cup final on Sunday against Chelsea. The first chance to claim silverware for the season will be up for grabs at the Wembley Stadium with kickoff set for 6.30pm.