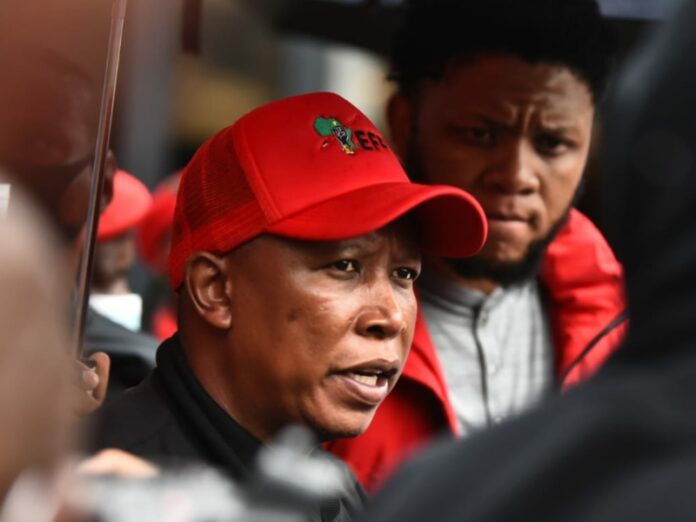 ActionSA President Herman Mashaba joined a chorus of critics condemning Julius Malema for taking the law into his own hands by mounting inspections of Joburg restaurants employing foreigners.

“The day South Africans resort to taking the law into their hands will be the day we collapse this country as citizens,” Mashaba, the politician most closely associated with the immigration issue, told Scrolla.Africa on Wednesday.

The comments and the inspections came amid mounting anti-immigrant sentiment in some communities and fears that the tensions will lead to another eruption of xenophobic violence.

Community groups such as Operation Dudula have in recent days been evicting foreigners and burning stalls in Soweto.

Mashaba begged people not to resort to violence. “South African and foreign nationals who are in this country legally must live together in peace and harmony,” he said.

Mashaba said the problem is not foreign nationals but the ANC government “that has failed to control and register who is in the country”.

Immigration has become a massive political issue. Mashaba’s recent local government election success was attributed to his party’s platform – wanting to send all undocumented foreigners back to their respective countries.

Malema, the EFF leader, had taken a different position, vowing in November never to turn against African immigrants in exchange for votes.

But yesterday’s “inspections” of employee lists at restaurants in shopping centres around Johannesburg to “establish” the ratio of foreign-born to local employees marked an abrupt about turn for the EFF.

At Ocean Basket in Menlyn, the EFF’s Obakeng Ramabodu said after meeting the manager that the party was “giving” the restaurant two weeks to reverse its ratio of South Africans to migrant staff.

Mashaba called the acts of those who harass businesses unacceptable.

He said government structures like labour departments and inspectors are employed to do their jobs for what they are paid for. “We cannot allow any South African to take the law in their own hands but rather use constitutional rights to express their dissatisfaction.”

Former Johannesburg Metropolitan Police Department chief David Tembe, who was recently appointed as MMC of Community Safety in Johannesburg, said that what the EFF did on Wednesday was really low. “I am surprised that the South African police didn’t act or arrest the people who acted outside the law.”

He condemned groups like Operation Dudula, whose leader Nhlanhla Lux removed foreign traders from the Bara taxi rank on Sunday, as criminals.

According to News24 Dudula misidentified some traders and evicted a few South African traders too. Lux is distributing a pamphlet calling for a day of action against foreigners on 22 January.

Former ANC NEC member Raymond Suttner wrote on his Twitter timeline: “Xenophobic discourse is always coded. No one simply says do away with/remove the foreign poor (for it is not aimed at wealthy people from the North). The EFF believes in nothing but benefitting themselves, so it matters little to them that they once preached an anti-xenophobic message.”

Independent pundit Palesa Morudu Rosenberg said on Twitter: “In 2022 the constitution is a problem. The rule of law is a problem. African immigrants are a problem. I see a pattern here. It is the coming together of right-wing forces and will lead to violence. Not a single poor person will benefit anything from what is about to come.”

Feminist and activist Nomboniso Gasa said she felt ashamed. “I have been trying to find a language to describe how I feel about the xenophobia and victimising of so-called ‘foreign nationals’. Then I realised there are no other words but simply to speak of the shame and own it. For now, I am unable to move beyond shame.”