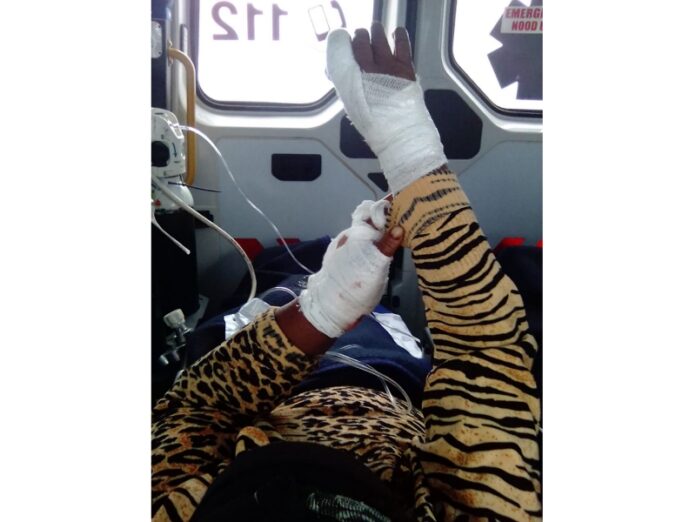 A pensioner fought tirelessly to save her two grandchildren from being horrifically assaulted by their own father.

Unfortunately, she could not save her own daughter from her son-in-law Vukile Mazana, who kidnapped his wife Nosikhumbuzo Ntlontlo-Mazana, 31, and hacked her to death with a panga.

Last Wednesday, Nosikhumbuzo arrived at her mother Ntlotlo Nobesuthu’s home in Pedi, Eastern Cape, in a state of terror. She warned her mother and her sister that Mazana was going to kill her.

“My sister returned home complaining that her husband was abusive and wanted her dead. When he came to our house my mother asked him to leave but he would not,” Nosikhumbuzo’s sister, Nokubonga, told Scrolla.Africa.

“He kicked the door open and started attacking my mother, my sister and her kids,” Nokubonga said.

She said that Mazana was determined to kill his own children, who are aged just eight and four. That’s when 62-year-old gogo Nobesuthu bravely put her life on the line by standing between him and the children.

So the 39-year-old turned his attention to his mother-in-law and proceeded to brutally attack her.

After attacking the old woman, Mazana allegedly tried to force Nosikhumbuzo to leave with him.

“My mother did not let him take my sister without a fight, thus he hacked her hand with his panga. He must have overpowered her but she fought him,” said Nokubonga.

Gogo Nobesuthu suffered deep cuts to her head and hands as she fought fiercely to protect her daughter and grandchildren.

After leaving the house, Mazana allegedly took Nosikhumbuzo to the nearest bushes, where he hacked her to death with the panga.

He later hanged himself at their home.

“The whole community is shocked by what happened. No words can describe the pain their children are going through right now to lose both parents in this manner,” said Majola.

Police spokesperson Tembinkosi Kinana said a murder docket has been opened in relation to Ntlontlo-Mazana’s death and an inquest investigation opened into Mazana’s death.