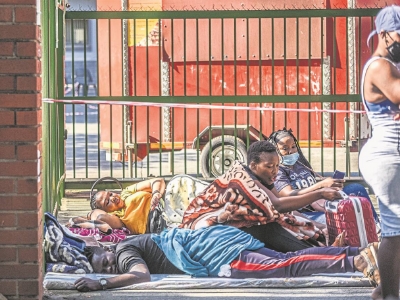 It’s been five days since thirty five students from Mgungundlovu TVET College in Pietermaritzburg started sleeping on the street outside campus with no food to eat.

They’re among the students who did not get their allowances for three months from the National Students Financial Aid Scheme (NSFAS).

This led to them being kicked out of their residences by their landlords.

Adding to their woes was the fact that no one from management intervened to help them.

The students were able to register but did not get their allowances, including private accommodation allowance.

Lungani Dlamini from Mpangeni pleaded with the officials from higher education to help them.

“We have been sleeping on the floor for a week. All we want is education, nothing else. We want to study and change our families’ situations.”

He said he would not go back home, which is more than 230 kilometres away from the campus.

Going back home would be a dream deferred for the electrical engineering student.

“When I left home, I promised my family that I would come back as a graduate. I haven’t achieved that as yet. I will fight for that to happen. That is the only time I will go back home,” said Dlamini.

He thanked the Good Samaritans, who have been giving them food and money.

The students have held a series of protests, but nothing has happened.

Many of them come from impoverished families in rural areas as far as Nongoma, northern KZN.

With winter around the corner, the students said they would not be able to brave the chilly Pietermaritzburg winter nights.

Nadipha Dingidlela from Matatiele has not told her parents about sleeping outside, fearing this will affect their ailing health.

“Our own institution is treating us like trash. No one wants to listen to us. Instead, they are telling us to go back home. I am not going to do that. I will fight for my education.”

The office administration student said they feared for their lives, especially at night.

Ishmael Mnisi, the spokesperson of the Higher Education and Training did not respond to questions sent to him.

Among the questions asked was when the department would intervene.