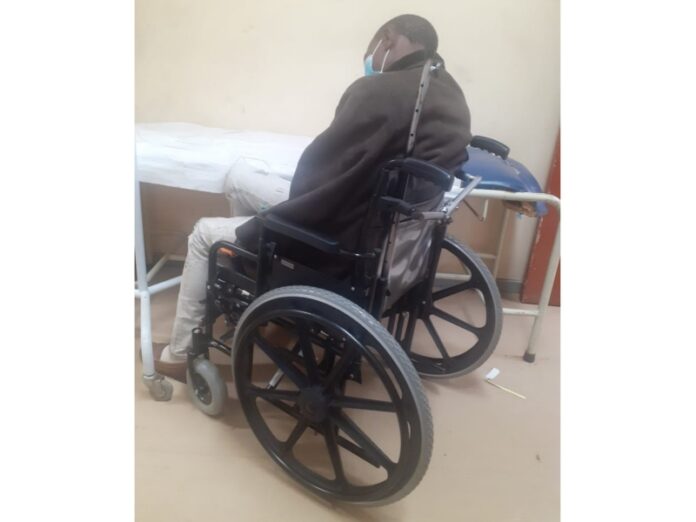 When Mpho Ngwane was rushed to the Far East Rand Hospital on Saturday night, all he wanted was to be relieved of an unbearable pain that was being caused by an ulcer.

But the 30-year-old from Payneville in Springs, Ekurhuleni received more than he bargained for.

He was allegedly repeatedly assaulted by two security guards at the hospital for lying on the floor.

Ngwane told Scrolla.Africa that he was waiting in the emergency ward for his mother who had gone to open a file for him.

He said they demanded that he move back to the wheelchair.

Without hearing the reason why he was on the floor, he said they forcefully carried him back to the wheelchair, hurting him in the process.

“Before I knew it, they were slapping me and punching me. They then wheeled me into one of the empty offices where they assaulted me until my mom came to my rescue.”

He said that he was weak and couldn’t defend himself.

Ngwane sustained facial and abdominal injuries and fractured ribs. He can barely speak or hear.

His mother, Gloria Ngwane, said that she heard her son screaming for help while she was walking from the administration desk.

“One of the nurses was telling other nurses that the security guards were assaulting some guy and it was not looking good.

“I immediately rushed to where the noise was coming from and found the two guards kicking and punching my son,” she said.

When she demanded to know what they were doing, they told her that Ngwane was “disrespecting them”.

“I could not understand how he was disrespecting them,” she said, “because I left him too weak for him to have the energy to start a fight.”

“If this is found to be true, proper consequence management will be taken and in the interim, all security officers that are implicated have been moved pending the outcomes of the investigation,” she added.