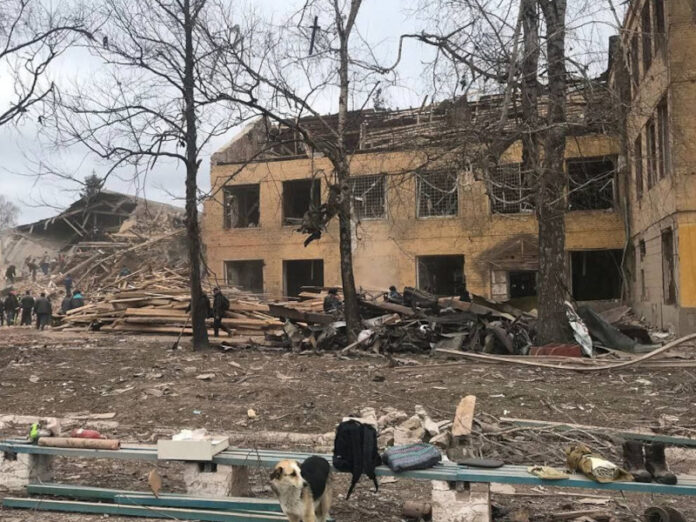 An attack by Russia on a military base in the eastern city of Okhtyrka in Ukraine has left more than 70 Ukrainian soldiers dead in what is said to be the biggest loss of life in a single attack since the invasion.

Ukrainian officials confirmed the fatalities on Tuesday morning following an increase in attacks by Russia in major cities including the use of multiple-launch rocket systems deployed in civilian areas.

Initial reports proved contradictory as some reported that the casualties came from a building destroyed by a single missile strike. Other reports suggested the deaths came by way of three strikes which included fuel-air explosives.

Okhtyrka mayor, Pavlo Kuzmenko, posted on Facebook, saying: “Again, the enemy is waging a vile war. A fuel-air bomb was dropped on an oil depot and oil tanks were blown up.”

Video footage emerging from the scene following the attack showed several soldiers attempting to move piles of concrete and rubble to lift the debris which had trapped several troops.

The attack comes as Russia moves closer to the capital city of Kyiv, a military convoy of Russian soldiers looked to have been 64km long, doubling in size since the weekend.

Photographs released by United States intelligence of an armoured convoy shows ground forces and ground attack helicopter units in southern Belarus. Concerns have been raised that Belarus will be sending troops to assist Russia within the next 24 hours.

Ukraine President Volodymyr Zelensky said that Russia is committing war crimes by attacking cities that have no military facilities.

“The Russians knew where they were shooting,” he said in a video address.

The prosecutor of the international criminal court said it would launch an investigation into the potential war crimes committed by Russia against Ukraine.