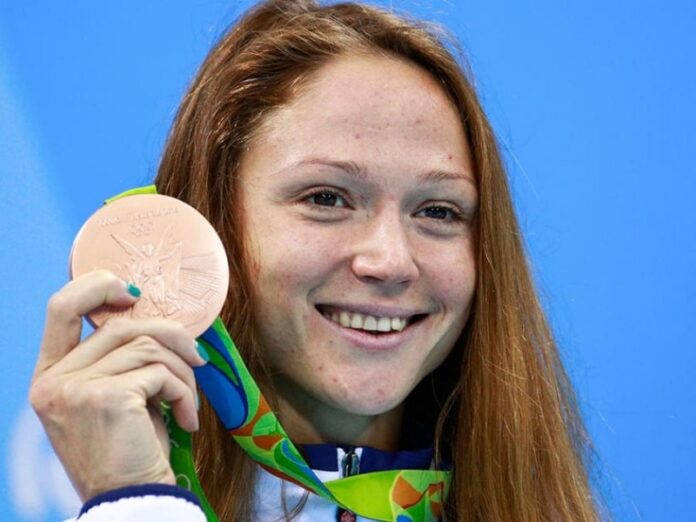 Olympic swimmer Aliaksandra Herasimenia fled her home country of Belarus to go to the Ukraine as she feared political persecution, now she has had to flee Ukraine in an attempt to save her family.

The three-time Olympic medalist was among several thousand people on the Polish border attempting to flee the country as Russian forces moved in on the capital city of Kyiv.

Herasimenia was one of several Belarusian athletes that protested the re-election of Alexander Lukashenko in 2020. With officials aiming to prosecute those who contested the decision, she and her family fled to Ukraine.

But less than two years later, Herasimenia found herself in danger once again, this time at the hands of Russian forces.

The day after Russia invaded Ukraine on 24 February, the 36-year-old along with her husband, mother and child packed their bags and began the 12-hour long drive to the Polish border.

Their three-year-old daughter was terrified by the sounds of explosions as they made a dash for potential safety and the Olympian had to tell her child that the noises she was hearing was thunder.

“Of course I had to make something up because how do you explain to a child that war has started?” Herasimenia told Reuters.

The swimmer is now in Warsaw, Poland and claimed her home country’s close ties with Russian President Vladimir Putin has meant she has been on the run for a long time.

“Those who left were the best of Belarusian society, those who were against what happened after the election, those who spoke out against the violence and expressed their position,” she said.

Belarus’ ties with Russia have seen similar sporting bans and suspensions including Herasimenia but she has begun efforts to compete independently.

She said athletes from Belarus tried to warn the world that Lukashenko was dangerous and his election would only lead to a negative future.

“We called on the Europeans, Americans and everyone in Ukraine for help. We warned that Lukashenko was very dangerous,” Herasimenia said.