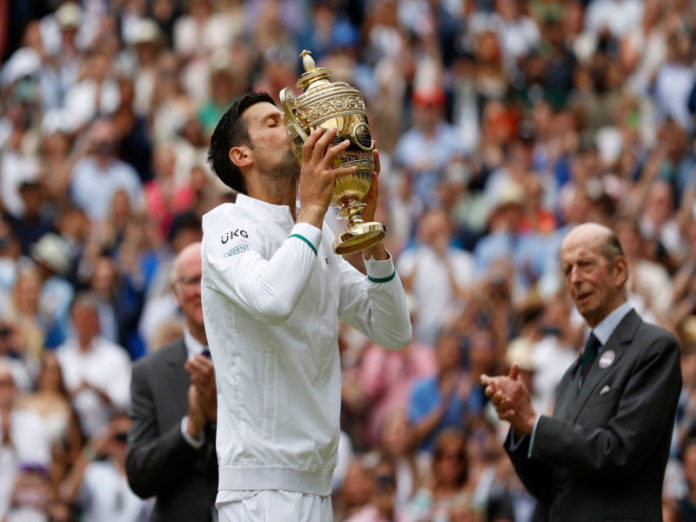 The 34-year-old Djokovic suffered an early scare as the energetic Berrettini claimed a 1-0 set lead, leaving Djokovic stunned. However, Djokovic put on an incredible display of fight and determination to complete his comeback on a day when the Serbian was not at his best.

Responding to his sixth Wimbledon triumph, Djokovic said: “A seven-year-old boy in Serbia constructing a Wimbledon tennis trophy in my room from improvised materials that I could find and today standing here with my sixth Wimbledon is incredible.”

The Serbian was made to work hard by a man who has a very bright future in the sport. The Italian Berrettini went toe-to-toe with the world number one and frustrated Djokovic throughout the encounter.

However, despite the 25-year-old’s best efforts, nothing was going to stop Djokovic from winning his 20th Grand Slam title and continuing his pursuit of standing alone as the player with the most Grand Slam titles.

The six-time Wimbledon winner began his career in 2003 and had to draw on his experience in the sport on a day where the Serbian did not look comfortable and struggled to get into the swing of things. Nevertheless, Djokovic soldiered on and proved that he is among the greatest tennis players of all time.

Djokovic will have his eyes set on the final Grand Slam of the year in the US Open which is set to begin on 30 August. Winning the US Open would see Djokovic become the player with the most Grand Slams in male tennis with 21.