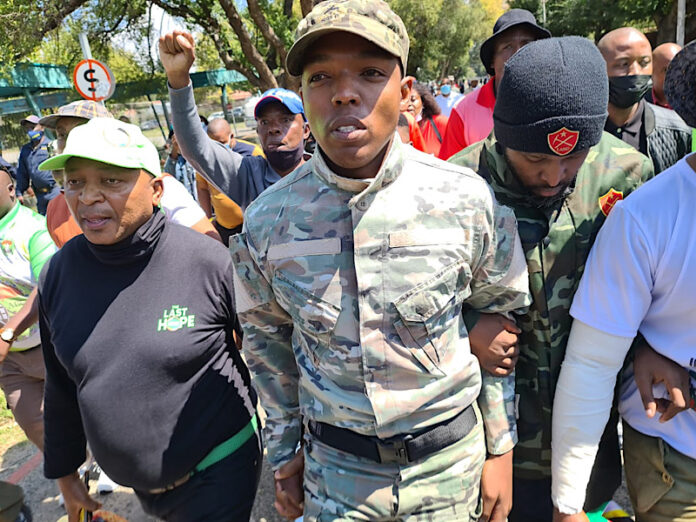 Operation Dudula leader Nhlanhla Lux Dlamini spent the weekend in police cells. But on Monday morning, he was granted R1,500 bail and released.

Lux walked out to supporters waiting for his usual firebrand address. But it was not what they expected.

Lux told his supporters to refrain from showing anger towards anyone, including the EFF, and that they should hug those who are against them.

“I am telling you now, if you see any EFF members anywhere, hug them,” he said to dozens of supporters at the Roodepoort Magistrate’s Court.

He said even those people who are against them will be the beneficiaries of what they are doing today.

When one of the supporters came on stage with a coffin with a print out of EFF leader Julius Malema’s face on it, Lux was visibly upset about it. He tore the paper off the coffin and instructed the man carrying it to get off the stage, before continuing to address the crowd.

The following Wednesday, the EFF’s national leadership accompanied Victor to the Dobsonville police station, where he opened a criminal case against Lux.

Twenty-four hours later, Lux was arrested after a radio interview in Johannesburg and spent the weekend at the Johannesburg Central police station.

He was granted bail in the Roodepoort Magistrate’s Court on Monday and is due to appear in the same court on 27 April.

National Prosecuting Authority regional spokesperson Phindi Mjonondwane said the bail conditions include handing over his passport and not travelling outside Gauteng.

He will also have to report to the police station.

Among the people who spoke outside court was the Alexandra Dudula Movement leader Simon Msayza Rati.

Msayza stressed to the supporters that they will continue evicting foreigners who own RDP houses. He said that these will be given to local South Africans who deserve them.

Operation Dudula supporter Jethro Mbatha said he is so happy to see his leader out of custody. “All I want to see now is us working under the arms of the law to avoid his arrest.

“His mission is great. We don’t want these undocumented foreigners in our country. They must go to their respective countries and fix their problems,” said Jethro.

The group is said to be launching in all provinces.