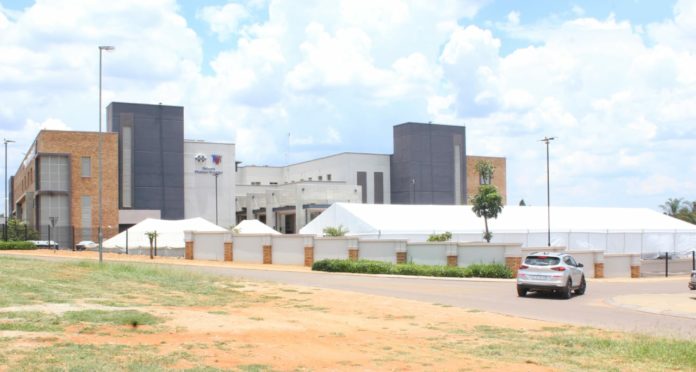 The surge in Covid-19 cases has forced Netcare’s Pholoso Hospital in Polokwane to erect a custom-built marquee tent to process patients.

The unit can accommodate up to 80 patients, and has been set up as part of the hospital’s disaster management plan.

Netcare CEO Dr Richard Friedland said this will ease the burden on the emergency department at the hospital and help stabilise patients before hospitalisation.

He said the fully air-conditioned unit has received approval from the Health MEC Phophi Ramathuba.

“The unit provides oxygenation, ablution facilities and safe areas for nurses and doctors to change into their PPEs. An additional 60 staff members have been deployed to assist at the hospital,” said Dr Friedland.

As Covid numbers rocketed across South Africa, Limpopo recorded 1,575 new positive cases in the last 24 hours – a sharp increase from 900 over the previous cycle, and the highest increase yet in the province.

MEC Ramathuba said these escalating figures indicate that residents were not following Covid-19 safety protocols during the festive season.

“We are now paying the price of social gatherings, Christmas parties and luncheons, weddings and birthday parties,” said Ramathuba.

Ramathuba said the Capricorn District still has the highest figure in the province, with 623 new cases.

In better news, Waterberg District was leading in the province but numbers are no longer increasing at such an alarming rate, with 189 new cases. Ramathuba said this is also the case with Sekhukhune District which has recorded 98 new cases.