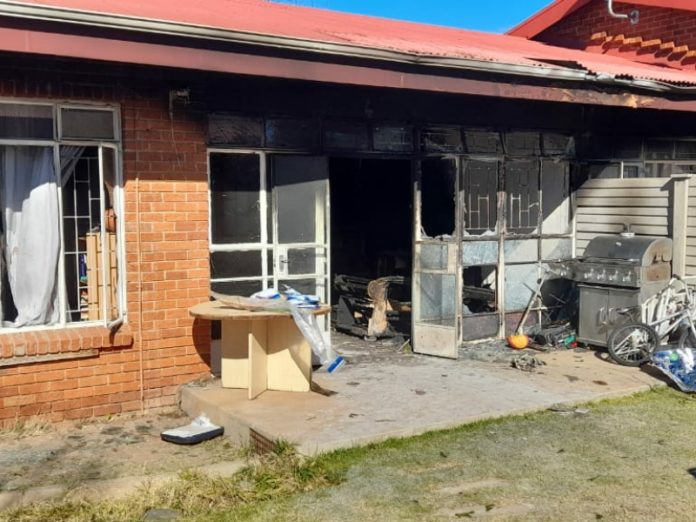 When firefighters came to the burning house, they expected to find injured or dead people, but they did not expect to find dead children with their throats cut.

Residents on Victoria Road, Bloemfontein were woken up by the smoke from a burning house in the early hours of Thursday and called the Parkweg police and firefighters.

When the blaze was extinguished at 5am, the firefighters found the bodies of a family of four. They discovered that none had any burn wounds.

While the parents are suspected to have died of smoke inhalation the children’s throats had been slit and stab wounds were found on their bodies.

Police said that a knife and a baseball bat were found inside the house and it is suspected that they were used to harm the children, a 14-year-old boy and a 17-year-old girl.

With no obvious forced entry a police officer said they were not ruling out the possibility of murder-suicide.

“The neighbours said they have never heard the couple arguing or fighting. We are waiting for crime experts from Pretoria to find out what started the fire,” said the cop.

A firefighter told Scrolla.Africa that none of the bodies had burn wounds.

“We found the girl outside on the grass and the boy was in a bedroom. The father was found in another bedroom and the woman in the main bedroom.”

A cop said the neighbours said the man was a kind-hearted person.

“The couple had two children but the girl was not his biological child,” she said.

The father, who is originally from Zimbabwe, was a professional chef and was said to be out of work when the incident took place.

It is alleged that the man was also hoping to get another job in construction outside the Free State. The mother was a hospital worker in Bloemfontein.

Colonel Mbambo said police have thus far been unable to contact the families of either the mother or father.

She confirmed that cases of murder, inquest and arson have been registered for further investigation and a postmortem will be conducted to determine the cause of death.