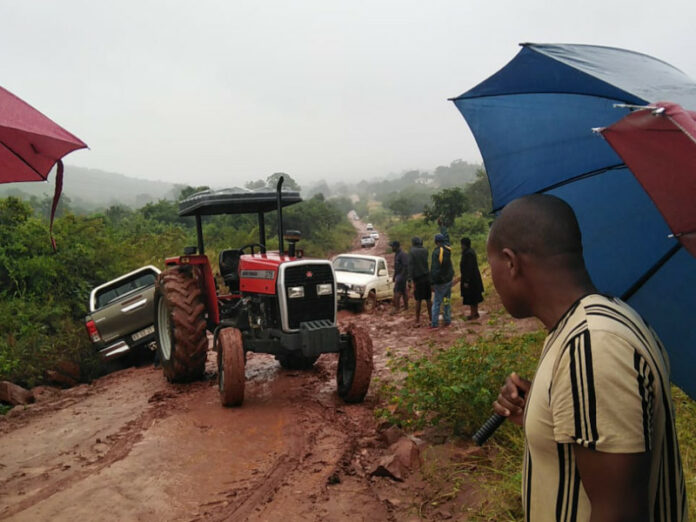 After numerous unsuccessful attempts to get the local Thulamela municipality to fix their badly damaged road, residents of four nearby villages got together to do something about it.

But just as the residents of Begwa, Mpandoni, Duvhuledza and Mubvumoni set about improving their lives, the municipality put a stop to it and left them worse off than before.

The 3 km stretch of gravel road between Habegwa and Mubvumoni outside Thohoyandou in Limpopo is littered with potholes. Its state is even worse during the rainy season.

Having waited patiently for help that never came, the villagers decided to contribute R100 per household to buy cement and the road project was started in January 2022.

They were going to use rocky sand mixed with cement on steep slopes which are difficult to negotiate during the rainy season.

Once the villagers had made significant strides, municipal officials came and stopped them.

The officials promised to complete the road. To show their commitment, the municipality soon brought machinery and loads of gravel soil.

The municipal officials are nowhere to be seen and have left loads of gravel soil on the road, making it impossible for cars to pass.

This has made the community very angry.

Community member Mashudu Ralukukwe said the communities had worked on the road piece by piece and they were hopeful they would finish the project soon.

“The municipality gave us false hope. We are very disappointed because we didn’t ask for their help, they just came to disturb our work by interfering in the project,” he said.

“Last week a big truck stalled here and cars from both sides of the road could not pass as only one lane is left and the other is blocked by sand.”

Ralukukwe added that they have been enquiring about the stalled progress but they are only given false promises by the municipality.