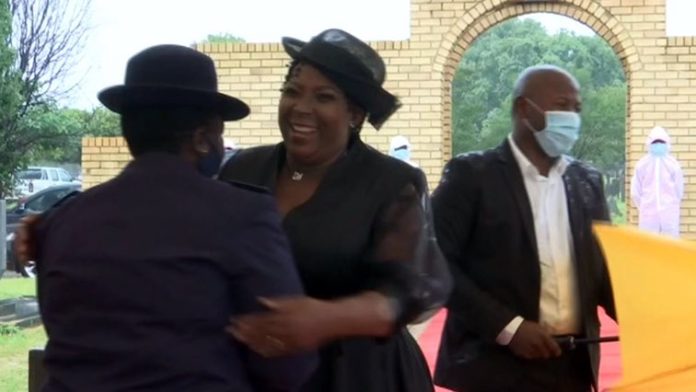 Mthembu had preached how masks were a crucial weapon against Covid-19.

But at his funeral on Sunday in his home province, after he succumbed to the virus, the premier was spotted not wearing a mask.

She also hugged comrades who had come to say their final goodbyes.

She claimed afterwards that she wasn’t aware that her mask had fallen off her mouth and nose.

After she apologised in a media statement later on Sunday, Minister Bheki Cele also released a statement expressing concern “about the alleged conduct of Mpumalanga Premier, Refilwe Mtsweni-Tsipane who was seen on national TV, not wearing a mask in public.

“If South Africa wants to beat this invisible enemy which is Covid-19, we simply can’t let down our guard. This is why I have spoken to the National Commissioner of the South African Police Service, General Khehla Sitole to look into the matter of the Premier and an investigation must be conducted and necessary action must be taken”.

In her statement, the premier said she was “apologising to the people of Mpumalanga for that momentary lapse wherein her mask fell without her being aware or conscious of it”.

This did not wash with many social media users.

A Twitter user with the name Special Someone wrote: “Refilwe Mtsweni-Tsipane premier of Mpumalanga. No mask, no social distancing, throwing hugs around . . . it will end in tears.”

Portia Gumede wrote: “That is the weirdest and dumbest thing ever. Your colleague passed away due to covid-19 and you rock up at their funeral without a mask? Mpumalanga premier is premium stupid.”