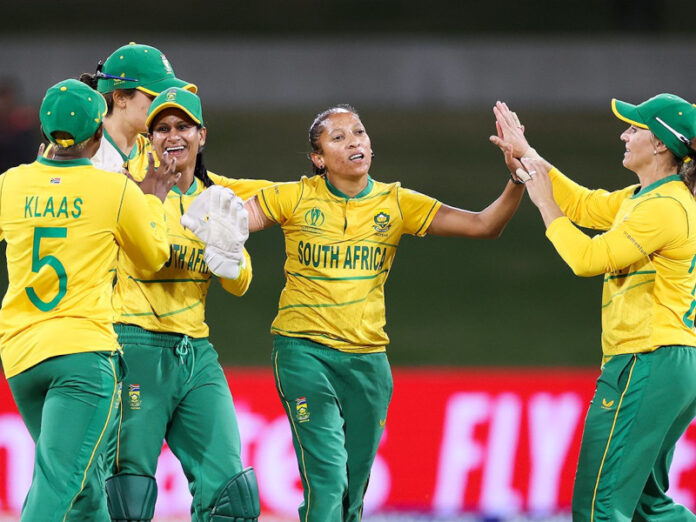 South Africa were the victors by six runs over Pakistan in their second ICC Women’s Cricket World Cup game under the lights at Bay Oval in Tauranga, New Zealand on Friday.

After putting the Proteas into bat first, Bismah Maroof’s side struck two early blows to dismiss Lizelle Lee and Tazmin Brits within the first eight overs.

A good stand between Laura Wolvaardt and captain Sune Luus helped South Africa to 110/3, with Wolvaardt racking up her 22nd career half century.

Chloe Tyron and Trisha Chetty did well in the middle overs to get the Proteas to a total of 223/9 at the end of their 50 overs.

Ghulam Fatima and Fatima Sana were the pick of the Pakistani bowlers with three wickets each to restrict South Africa to what they hoped would be a gettable target.

Pakistan were steady with the bat and looked within touching distance of a successful chase in the final few overs.

However, it was deja vu for the two sides from their 2017 World Cup encounter in Leicester; with Shabnim Ismail yet again delivering the goods to take South Africa home.

Five years ago, she did it with the bat to chase down 14 off the final 10 deliveries, and today she helped her side with the ball in defending the same score at the death.

“As a strike bowler, I like to come out at the death. I was always confident. I love catches, that was 100 percent mine. I don’t take a lot of catches during warm-ups but I always back myself,” Ismail said as she collected her player of the match award.

South Africa next take on England at Bay Oval on Monday.