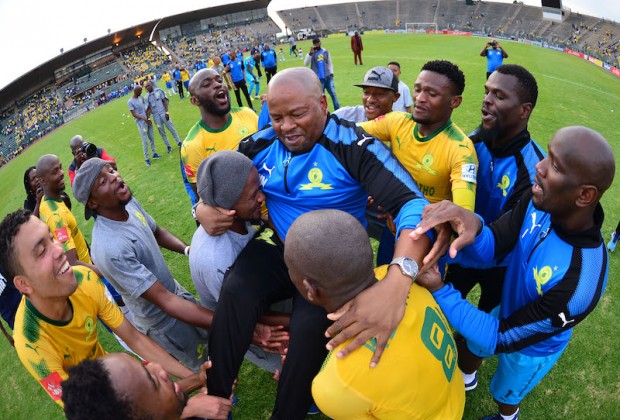 Manqoba Mngqithi, Mamelodi Sundowns co-coach, says he knows everything there is to know about Golden Arrows.

The two unbeaten teams in the DStv Premiership meet on Saturday afternoon.

Mngqithi said he watched Arrows closely in their 2-0 win over AmaZulu on Wednesday.

“We’ve looked at their structure and we are fully aware of their abilities and strengths,” he said.

He said they will look to counter the diagonal and long balls from danger man Nduduzo Sibisi as they go behind the defence.

“But our biggest concern is their strong midfield of Ntsako Makhubela, Seth Parusnath and Gladwin Shitolo,” he said.

“But I think we have it under control. We are ready to compete.”

Mngqithi will not be on the bench for Sundowns for Saturday’s match at Clermont’s Sugar Ray Xulu Stadium in Durban at 3.30pm. The Mzimkhuku-born was shown a red card at Maritzburg United and was suspended for two matches.

He served his first when Downs won against TS Galaxy on Tuesday.

Mngqithi and his co-coaches, Rhulani Mokwena and Steve Komphela will pin their hopes on their front three, Themba Zwane, Peter Shalulile and Kermit Erasmus.

On Monday Downs will travel to Botswana to face Jwaneng Galaxy in the CAF Champions League preliminary 2nd round. This first leg will be played at Lobatse Stadium on Tuesday at 3.30pm.