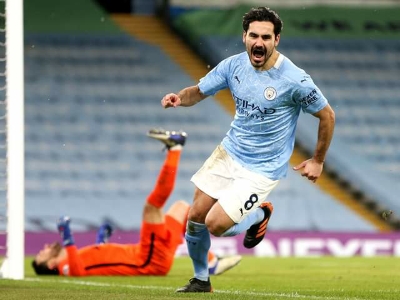 Lately Manchester City are taking no prisoners and on Saturday they won an 11th straight league match, making them the first team to enjoy such a rich winning streak this season.

The Citizens produced yet another world-class performance as they beat Tottenham Hotspur 3-0 at Etihad Stadium. It was sweet revenge for City after Spurs beat them 2-0 in the league’s reverse fixture in November.

The win has taken the six-time EPL winners to seven points clear on top of the table, and with a game in-hand.

Player of the month for January, IIkay Gundogan was once again on target, scoring his second brace in two consecutive matches. However, he had to see out his man of the match performance in the stands due to an injury to his groin.

His first brace was last Sunday when they demolished Liverpool 4-1.

The 30-year-old midfielder is enjoying the form of his life since taking the number 9 role in the absence of forward Sergio Aguero.

Gundogan’s recent form has seen him score 11 goals in 12 matches.

“I am delighted about his performance,” said coach Pep Guadiola.

“He won the player of the month last month and he could do it again this month.”

In another title match on Saturday, Leicester City came from a goal down to beat Liverpool 3-1.

Once again the Reds keeper Alisson Becker produced a howler when he gifted Leicester three points, just as he did last week against the Citizens.