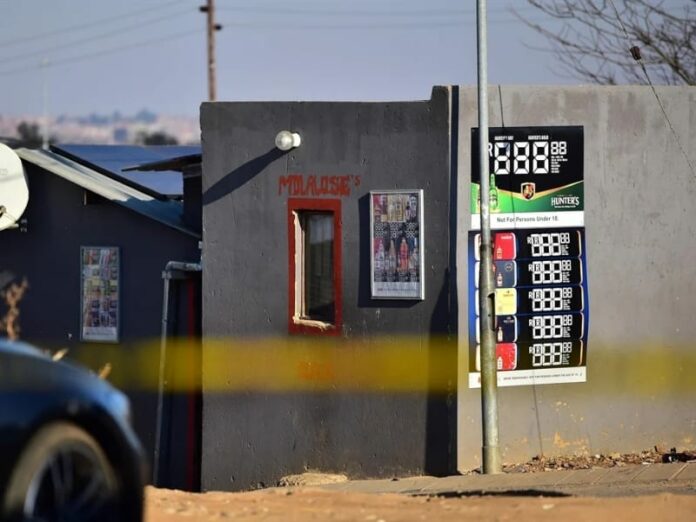 The owner of the Mdlalose tavern in Soweto, where 16 people were shot dead at the weekend, is currently lying low, apparently for fear that the gunmen will return to kill him if he speaks out.

Sitting in a white Toyota Quantum taxi parked opposite his tavern on Wednesday, he observed the goings-on around his home.

Wearing maroon overalls, a blue cap, and traditional isiZulu sandals, he exited the car. He seemed to be uneasy and was constantly on his phone.

“I’m not speaking to papers. If you want any information, speak to the police,” he said.

He has refused to speak to the media. One person he has confided in, however, is ward councillor Mohau Molefe, who told Scrolla.Africa that he’s deliberately keeping out of the public spotlight.

“He is afraid that whoever did this might come back to finish what he started because he could have been the target as well,” said Molefe.

As long as the five suspects of the shooting remain at large, he has vowed to keep his distance from the media.

“The owner is back from KwaZulu-Natal but he is not yet comfortable speaking to anyone. He told me that he has no intention or interest in engaging with the media about what happened at his place of business last week,” the ward councillor explained.

“He said he was still shaken and trying to get his head around what happened in his tavern.”

Molefe added that the owner will visit all the families individually when the situation is calmer and under control, with the police investigating the cases.

He said a memorial service for all the victims will be held on Thursday.

A woman who used to work at the tavern described her former boss as a respectful man. “I only worked there for two months and left for my own reasons,” she said.

She explained that she had a good working relationship with the tavern owner during the time she worked there.

“He is down to earth and respects people. That’s why people love coming to his tavern.

“I feel sorry for him because there’s never been a violent incident of this nature at his place. I don’t know how he’s going to get past this as well as all the families affected,” she said.

No one has been arrested for the murders and the police are still investigating.