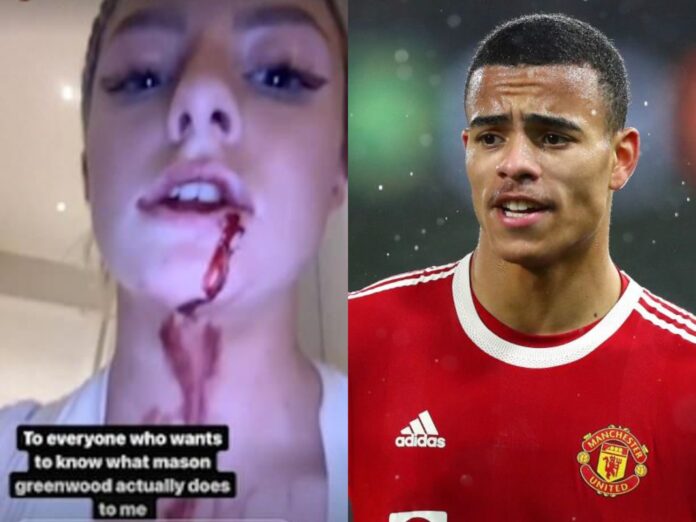 Manchester United forward Mason Greenwood has been accused of domestic violence and attempted rape by his girlfriend.

The woman, Harriet Robson, posted the accusations – with images, videos and voice notes – on Instagram on Sunday morning. But they were deleted shortly after they were posted.

One image shows Robson with a huge, bloody cut on her lip. Others show bruises on her leg, arm and hip.

Robson also posted a voice note recording of a disturbing argument taking place between a male and a female.

In the recording, the woman, referred to as “Harriet”, appears to be resisting sexual advances from a man called “Mason”.

When she tells him that she doesn’t want to have sex with him, he appears to threaten her with violence.

He says: “Push me again one more time and watch what happens to you.”

After she says “No”, he says: “Well you will actually and watch what happens. Get the f*** off.”

“Greater Manchester Police is aware of the images and videos. Enquiries are ongoing to establish the full circumstances,” the police said in a statement.

Police later arrested a man on suspicion of rape and assault, according to journalist Mike Keegan. It has not been confirmed whether the man in question is Greenwood.

Manchester United said in a statement that they were aware of images and allegations circulating on social media.

The club later confirmed that 20-year-old Greenwood will not return to training or play matches until further notice, according to journalist Fabrizio Romano.

Greenwood, who is a full England international, has played 129 times for the Manchester club, scoring 35 goals.