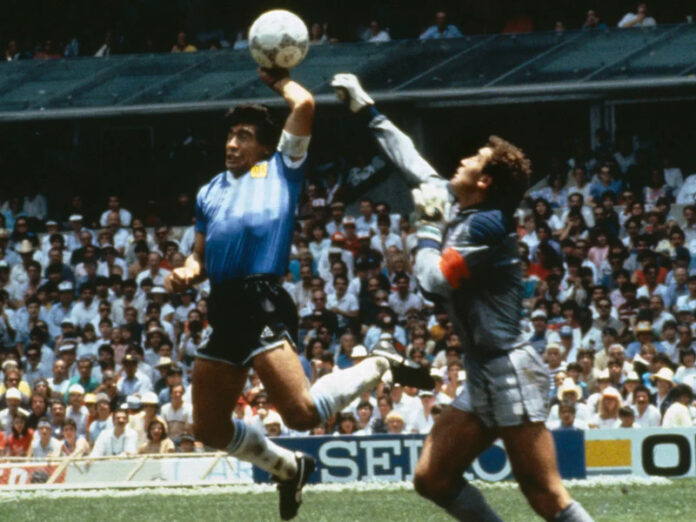 The Argentina shirt worn by the late great Diego Maradona on the occasion of the 1986 FIFA World Cup quarter-final against England, is estimated to sell for at least £4 million (R77 million).

The legendary number 10, who passed away in November 2020, scored a brace to historically knock England out of the World Cup — with both goals being remembered for completely different reasons.

One was a spectacular solo goal; as Maradona took on almost the entirety of the Three Lions side to go on to score, but first there was the infamous “Hand of God” goal.

Former Nottingham Forest and England midfielder, Steve Hodge, flicked the ball into Maradona’s path and the Argentine “handed” it home, stating after the match that the goal was “a little with the head of Maradona, and a little with the hand of God”.

Hodge went on to swap shirts with Maradona after the game and has owned it ever since, loaning it to the National Football Museum in Manchester for the past two decades.

“The ‘Hand of God’ shirt has deep cultural meaning to the football world, the people of Argentina, and the people of England, and I’m certain that the new owner will have immense pride in owning the world’s most iconic football shirt,” Hodge said per the Guardian.

It will now be auctioned at Sotheby’s with bidding opening from 20 April and will also be on public view at the auction house’s London gallery.

The shirt is described to be in “good overall condition” with Sotheby’s saying on its website that it is “consistent with heavy use, perspiration and athletic activity with slight de-threading on hemming on the front bottom of shirt, and minor spots throughout”.

The shirt could go on to become the most expensive match-worn sports jersey of all time, should it beat the price of Babe Ruth’s New York Yankees shirt which was sold for $5.6 million (R82 million) at an auction in 2019.