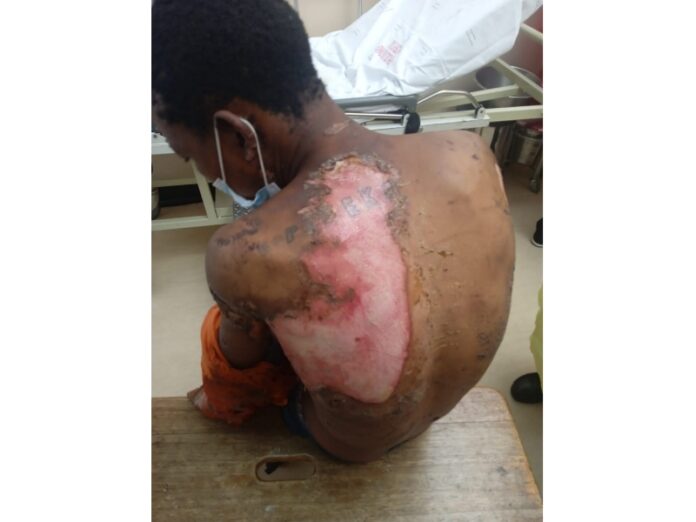 After being tortured for hours, Bongani Maditsi was doused with petrol and set alight, after vigilantes accused him of stealing his neighbours’ plasma TV.

Bongani was accused of the crime after a community member said they spotted him running near the house in Tsakani in Ekurhuleni around the same time the perpetrator stole the TV.

The two neighbours and their friend forced entry into Bongani’s home and demanded that he confess to stealing the expensive TV.

When Bongani denied having any knowledge of the crime, they forced him to accompany them to a local dam, and again told him to confess.

The 28-year-old told Scrolla.Africa that they tied him up with a rope and threatened to kill him if he didn’t tell them where he had hidden the TV.

The distraught Bongani said he saw his life flashing before his eyes.

“They were hurling insults at me while pouring petrol on me and setting me alight. I managed to run into the dam trying to put off the flames but they were too vicious.”

Bongani said when the trio saw him running towards the dam, they promised to finish him off if he survived.

“I prayed hard to survive the ordeal and not drown while I forced my body deep into the water until the flames were finally off,” he said.

“In my weak state I managed to find my way out of the water and fainted on the banks of the dam.”

He was found by a cattle herder on Saturday morning who helped him find his way home.

It was later alleged that the TV was stolen by a drug-addicted nephew of one of the suspects.

Bongani suffered third-degree burns and is now living in hiding.

Tsakani police spokesperson, Sgt Lerato Mngomezulu, confirmed that they are investigating a case of attempted murder.

“Two suspects were arrested and appeared at the Tsakani Magistrate’s Court on Tuesday and they were remanded in custody for further investigations,” she said.