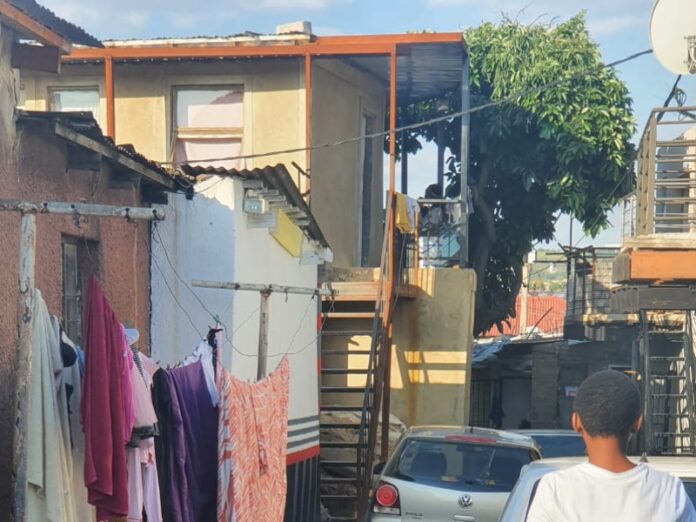 Anele Buthelezi waited behind for just a moment after he and his brother Shane Siganunu decided to go outside to the communal tap for a drink of water on Tuesday afternoon. When he went outside to join him, Shane wasn’t himself.

He was standing up but he wasn’t responsive, and when Anele touched him, he experienced electric shocks.

Shane, 25, had received a deadly electric shock when he leaned against his neighbour’s steel staircase next to the tap. A few moments later he collapsed and died.

“When I touched him, I experienced electric shocks. Then I realised that he could be electrocuted and I used my jersey to pull him away from where we were standing,” Anele told Scrolla.Africa.

After Shane fell to the ground, Anele shouted to a group of people who were standing around the yard to help him take his brother to the hospital. But by then he already knew his brother’s life was beyond saving.

“As I waited for the car, I saw my brother taking a deep breath and he stopped breathing after that. Although I knew he was dead, I pushed for everyone to hurry him up to Edenvale hospital hoping that doctors would bring him back to life.”

He said his sister took him to the hospital in their car. But sadly, Shane was declared dead on arrival.

Anele said if he didn’t realise that his brother was electrocuted after touching him, he too would have been dead.

“I nearly died with my brother… I didn’t know he had been electrocuted. I watched him take his last breath.”

Elvis Mhlongo, the owner of the double-story house, said he first heard about electricity running through his steel staircase on Saturday and Sunday from children who were playing.

“I have no idea how the power gets to the steel,” said Elvis.

He said that later on Tuesday, City Power officials came and switched off power in his house.

“They have told me to call a professional electrician to assess the house and do safe wiring for the whole house.”

“Our technicians tested the scene and found the stairs and steel around the house including roofing were live at 220v.

“We suspect the house is bridged inside with no earth wires. We have cut supply to the house,” said Mangena.

He said residents in the yard say the kids complained about the shocks over the weekend, but adults didn’t take them seriously.