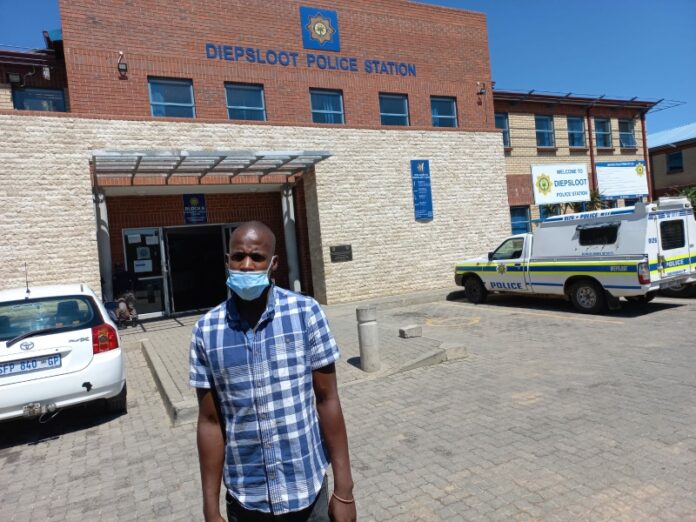 Hot klaps, stones, bullets, and beer bottles flew at a police roadblock in Diepsloot Extension 5 where Banele Showe was allegedly beaten up by a police officer.

Banele, 27, from Diepsloot Extension 4, was stopped at the roadblock and told to reverse his car.

Banele, who works as a delivery driver, told Scrolla.Africa that there were cars behind him and he couldn’t do that.

He added that the two police officers were in an unmarked vehicle and not in uniform.

“While I was in conversation with the two officers, another police officer came from a marked double cab van coming towards us and without giving me a chance to explain just slapped me.

“The other two officers watched me crying in pain at the hands of their colleague and did nothing,” said Banele.

He said he was taken into the back of the van.

Three other men who were taking photos and videos of the incident were also assaulted, Banele claims.

“The three men fought back by throwing beer bottles and stones at the police. The officer who had assaulted me discharged his firearm in the air and quickly picked up the bullet shell and put it in his pocket,” he said.

Banele said he was taken out of the police van and told to drive to the police station in a convoy with them. “I led the way while they drove behind me.

“When we got to the police station, I was told to go because this issue would be a big problem for them if I were to be detained.

“But by the time they told me to go, I couldn’t hear from my left ear. I was bleeding,” he said.

Banele said he lives with constant pain in his left ear.

He  opened an assault case against the police.

Diepsloot police spokesperson Captain Tinyiko Maluleke confirmed that a case against one of their colleagues was opened at the station. The docket is being handled by the Independent Police Investigative Directorate (IPID).