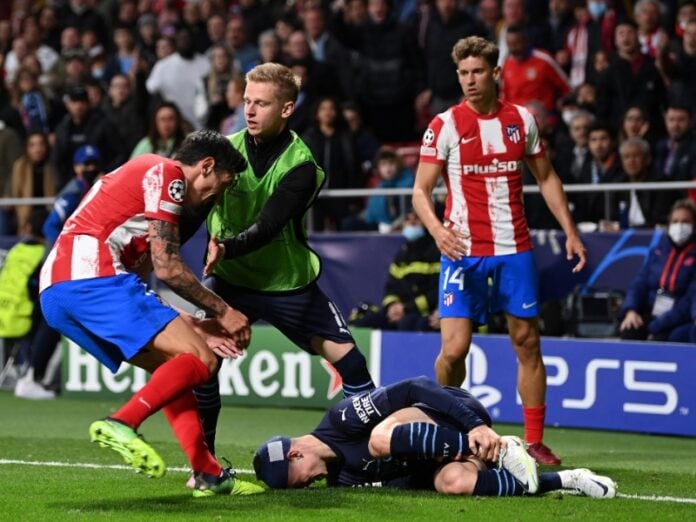 The two teams came to blows on several occasions during the two legs and at the end of the second leg, an all-out brawl ensued between the players and coaching staff.

City emerged 1-0 victors and found themselves in consecutive semi-finals after losing in the final last season.

Atletico are known for being an aggressive side, cheered on by their manager Diego Simeone. That aggression was felt by the City players.

“Our physios made 71 treatments in the space between Atletico Madrid and the semi-final against Liverpool,” City manager Pep Guardiola said.

“The full figure is 71, it’s true. The doctor came to me. It’s not from one game, it’s from the past (three). It was not just one or two, it was a lot of players. That’s what they told me. I didn’t ask them what it is normally, what is the average, but I am sure it is less.”

Battered and bruised after the game, the City players needed a lot of medical attention before their FA Cup semi-final against Liverpool.

“We had six massage tables on the pitch watching the guys who didn’t play in Madrid doing the training session,” Guardiola added.

Understandably, Guardiola made seven changes for the game after the “mentally and physically demanding” Atletico clash.

Those changes came back to haunt Manchester as American goalkeeper Zack Steffen was guilty of an error that led to Liverpool’s second goal.

Guardiola however defended his decision to make changes to his squad, particularly in the goalkeeper position.

“But I prefer that the day after the game you go out to take a drink outside. I prefer you sleep bad and worry for the team,” Guardiola said.