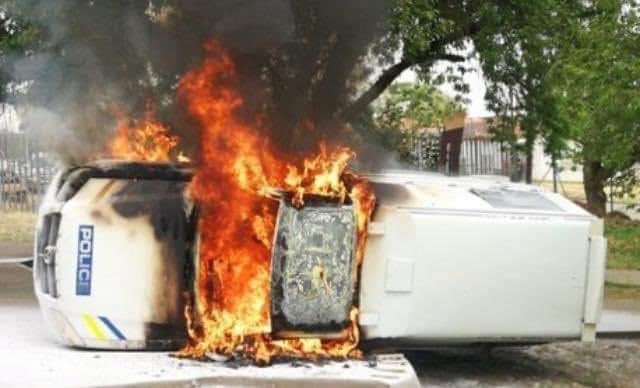 A 52-year-old farmer has been arrested for his role in the alleged police van torching outside the Senekal Magistrate’s Court in the Free State on Tuesday.

Police Ministry spokesperson Lirandzu Themba said Police Minister Bheki Cele has called for more arrests to be made. “Minister has welcomed the arrest of the first suspect involved in the violent demonstrations by a group of farmers.

“Cele is calling for more arrests as it is clear the criminality that took place was a collective act that threatened the rule of law,” said Themba.

The van was torched when chaos erupted outside the court after two suspects accused of murdering a farm manager, Brandin Horner, were sent back to holding cells and their case postponed to 16 October.

“The group of armed demonstrators, among them armed farmers,  stormed into the court building – demanding the two suspects be handed over.

“The lawless acts resulted in the vandalism of court property and a police vehicle was also overturned and set alight,” said Themba.