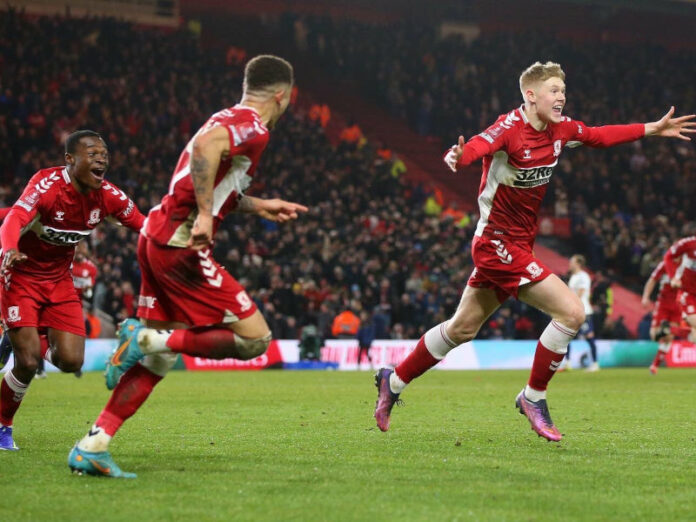 Middlesbrough’s teenage substitute Josh Coburn struck a devastating blow in second half extra time to cause the team’s second major upset of the FA Cup.

Even after their dramatic penalty shootout win against Manchester United in the fourth round, not many would have thought that Chris Wilder’s side would do it against an in-form Tottenham Hotspur.

Conte named an unchanged side after his team thumped Leeds United 4-0 at Elland Road on Saturday, with Hugo Lloris, Heung Min Son and Harry Kane all starting for the North London side.

Spurs winger Dejan Kulusevski troubled the Boro defence and Kane had a goal ruled out for offside on the one hour mark. But the hosts looked more comfortable as the Riverside Stadium crowd urged them on.

Extra time loomed as the scores were locked at 0-0.

The hosts piled on the pressure in the first half of extra time and got the breakthrough minutes into the second period. A Matt Crooks pass split Spurs open and its goalkeeper stood no chance when Coburn slotted it home.

Tottenham right-back Emerson Royal played him onside — and the magic of the FA Cup had struck again!

Middlesbrough as a championship side, on the other hand, have knocked out multiple top-flight opposing teams in the FA Cup, after the first time in the 1991/92 season.

Spurs next host Frank Lampard’s Everton in an important Monday night football clash, with the race for a European place still very much alive.